Who would have thought this was so easy?

I recently finished my precious stash of Italian artisan crystallized peel, and I was about to peel an orange.   I like to use my old Tupperware orange peeler - What do you mean, you haven't got one? Didn't you go to any Tupperware parties back in the 70s? They gave them away all the time... what's that... you weren't born then?

Oh.  Well, look, they are these things...you can still find them on eBay and Amazon. 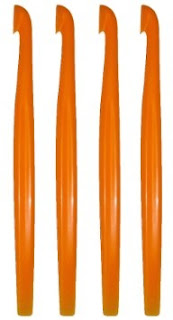 So anyway, I was peeling my orange, and with these, you peel your orange in nice petal shaped pieces, that include all the pith. They looked just like my artisan Italian orange peel. You see where I'm going, don't you?

Remember, girls and boys, Google is your friend.  A quick shuffle through the interwebs, and it would seem that crystallizing your orange peel is something commonplace. You start by putting your orange peel petals in cold water and bringing it to the boil, and then chuck the water away. Don't fret, as you throw the aromatic golden water down the sink, that you are throwing all the taste away; there is still plenty of flavour in your orange peel. But too much of the wonderful orange oil can be bitter and make your mouth tingle, so it is better fragrancing your pipes than searing your throat.

You now do the blanching and jettisoning of the water again. Then one more time, but this time don't chuck the water, let the peel simmer for about 20 minutes until nice and soft and you can push a skewer through without any resistance. Once the peel goes into the sugar (the process is the same for marmalade) it won't get any softer so you want it as soft as you like it now.

I used the peel from two large navel oranges, as I was making this as an experiment and didn't want to make too much at once. By the way, you don't want the thin skinned oranges, you want something with a fairly thick slightly nobbly skin. The pith will go transparent and delicious when it is candied 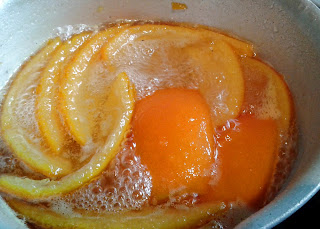 For that amount of peel, you only need a small pan, so it's not going to take forever to come to the boil. Dissolve 500g of granulated sugar gently in 300g of water, and when it is all dissolved, bring the mixture to a boil. Drain your softened oranges and carefully pop them into the boiling sugar. Bring the sugar down to a nice simmery boil, not a massive seethe as you don't want to risk it starting to caramelise.  Let them boil for 45 minutes, then remove them onto an oiled rack to cool down. (Do not throw the syrup away, we're going to do something with that whilst the orange peel cools down.) 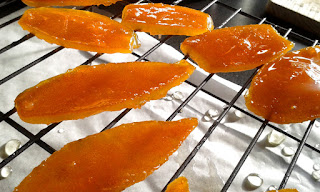 When the orange peel is cool, toss it into a ziplock bag of granulated sugar to keep for deliciously orangey buns, and Christmas cake. Or, slice into matchsticks and toss these in granulated sugar for lovely, sticky twigs of joy. To eat as they are, or to dip into dark, glossy chocolate for pretty petit fours.

Are you looking at that pan of syrup now? Ah, it is still on a low heat keeping warm? Well first of all, get the remains of that pot of double cream out of the fridge, pick up the salty butter. And grab the pack of Maldon salt. Now crank up that heat, you are going to caramelise the remaining bit.

No stirring now. Just shake it from time to time to spread the heat evenly. There is still quite a bit of moisture in the syrup so it will be very frothy, unlike when you make caramel from scratch, but give it time, you'll start to see the edges go brown. Start sniffing. You want the caramel smell to just have a faintly bitter edge, but don't overdo it. Bitter is good, burnt is not.  Pour in a nice glug of cream. 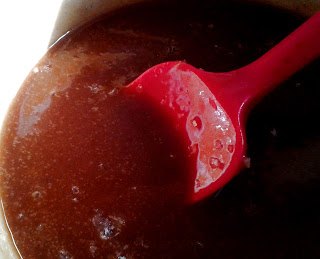 No, I don't know how much, as I don't know how much syrup you have left over. But enough to make it the right colour. It will seethe and froth and the caramel will turn to a fat lump in the middle. Don't panic. Just put it back on a lowish heat and stir with a silicon spatula until the caramel has melted back into the cream. The stir in a couple of tablespoons of salted butter, and a good sprinkling of Maldon salt. You can add a couple of drops of good orange essence if you want to push the orange flavour up.  Stir it all up, let it cool slightly and pot it as you would jam.  I made two one small pots of golden brown glory. 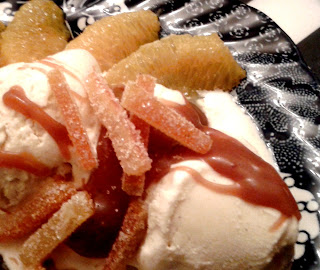 Let it cool down, then either spoon it over icecream, onto the bottom of a tart case to be topped with bananas and whipped cream.

Or, take a spoon and lovingly eat it. I assure you I didn't make two pots full, I only made one. The empty one with a spoon is a figment of your imagination....
Posted by josordoni at 11:02 No comments: