A Late Easter Colomba and a couple of Colombine

UPDATE 30/5/14:  so sorry if anyone has tried this recipe and wondered why on earth it was called a sweet enriched bread, since it had NO SUGAR in it.... I managed somehow to forget it entirely when writing up the recipe. It was only when I used this post today for quantities when I made a Colomba to take for a tea party with Katherine at Mustard Seed , that I realised it was without the sugar.  The recipe has been changed below now, but if you have already tried it I am really sorry...


I was really lucky to win a Colomba kit from Bakery Bits, with the special cases for the Italian speciality bread Colomba.  I have been wanting to make this for a while, it is like a Panettone but with an almond and egg white icing on top, with orange zest, fiori di sicilia essence and candied orange peel inside. And yes I KNOW it is an Easter bread.... I am late!!


Each of these amazing Italian breads has literally dozens of different methods, so I decided to use my own favourite sweet bread mixture, and add the flavourings to it.  This is a very simple dough to make if you have a stand mixer, and those are the instructions I have given below.. Although it can be made by hand, it is hard work and takes a fair amount of time. You can see the hand kneading method in the videos I added into the gibassier post here.

I made it first of all for the fabulous Thane Prince Cook Book Club at the end of April (gosh that long ago already.....) but I used all of the mixture in one case. Too much of a good thing, it flowed all over the sides and looked awful. Look.... 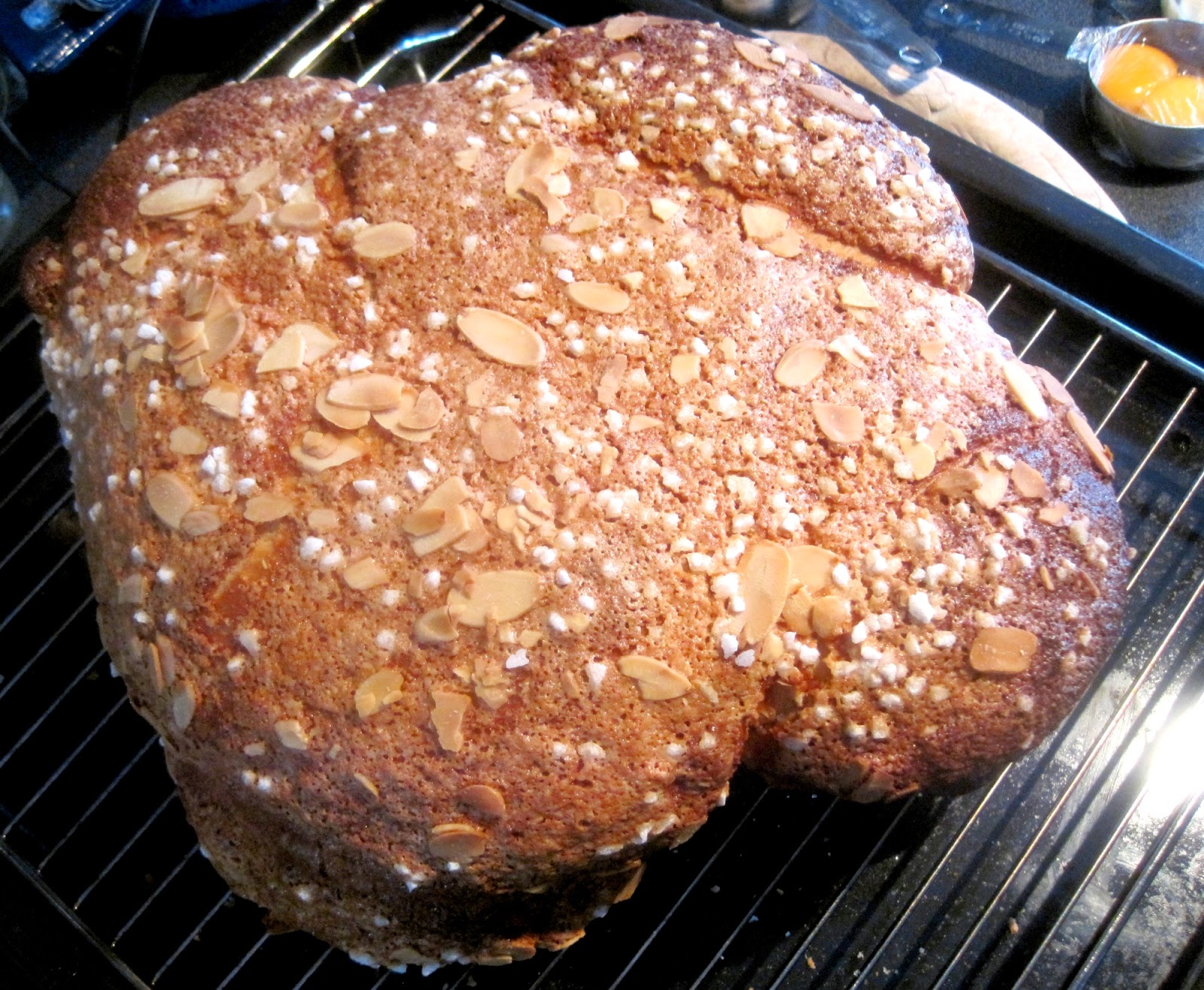 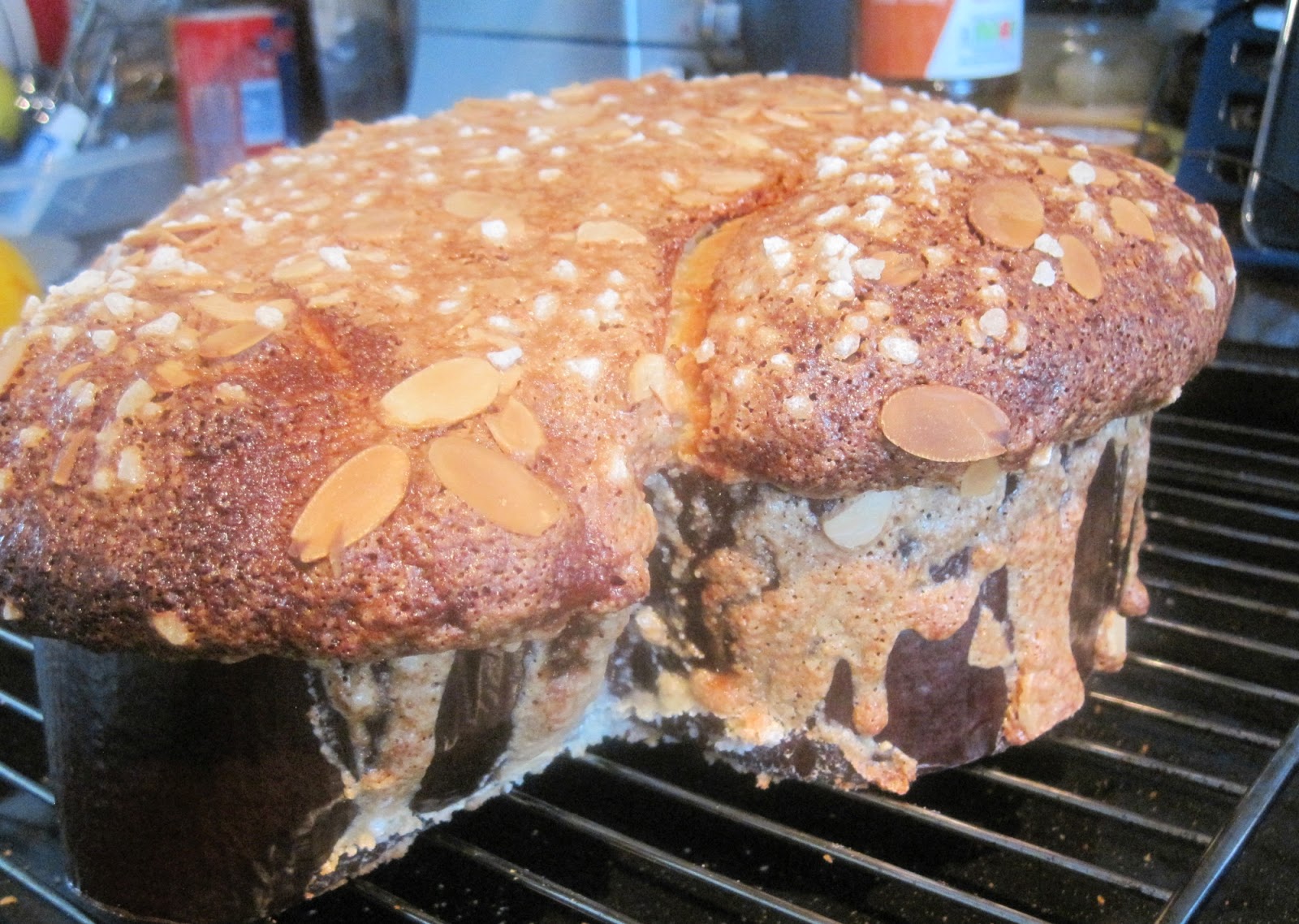 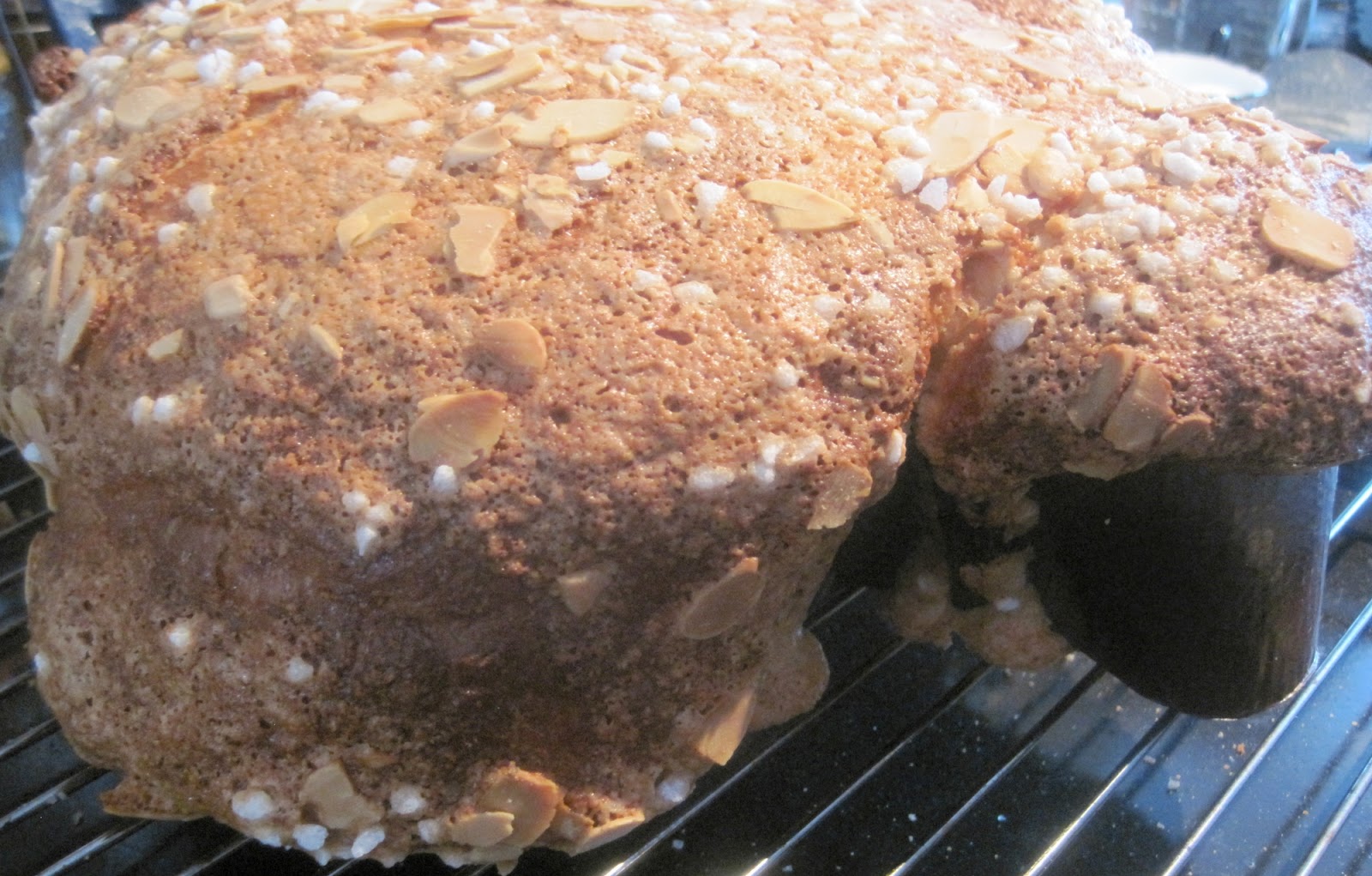 But it cut into light fluffy pieces, and everyone devoured it with much relish and lip and finger licking. Look at the lightness of this crumb. 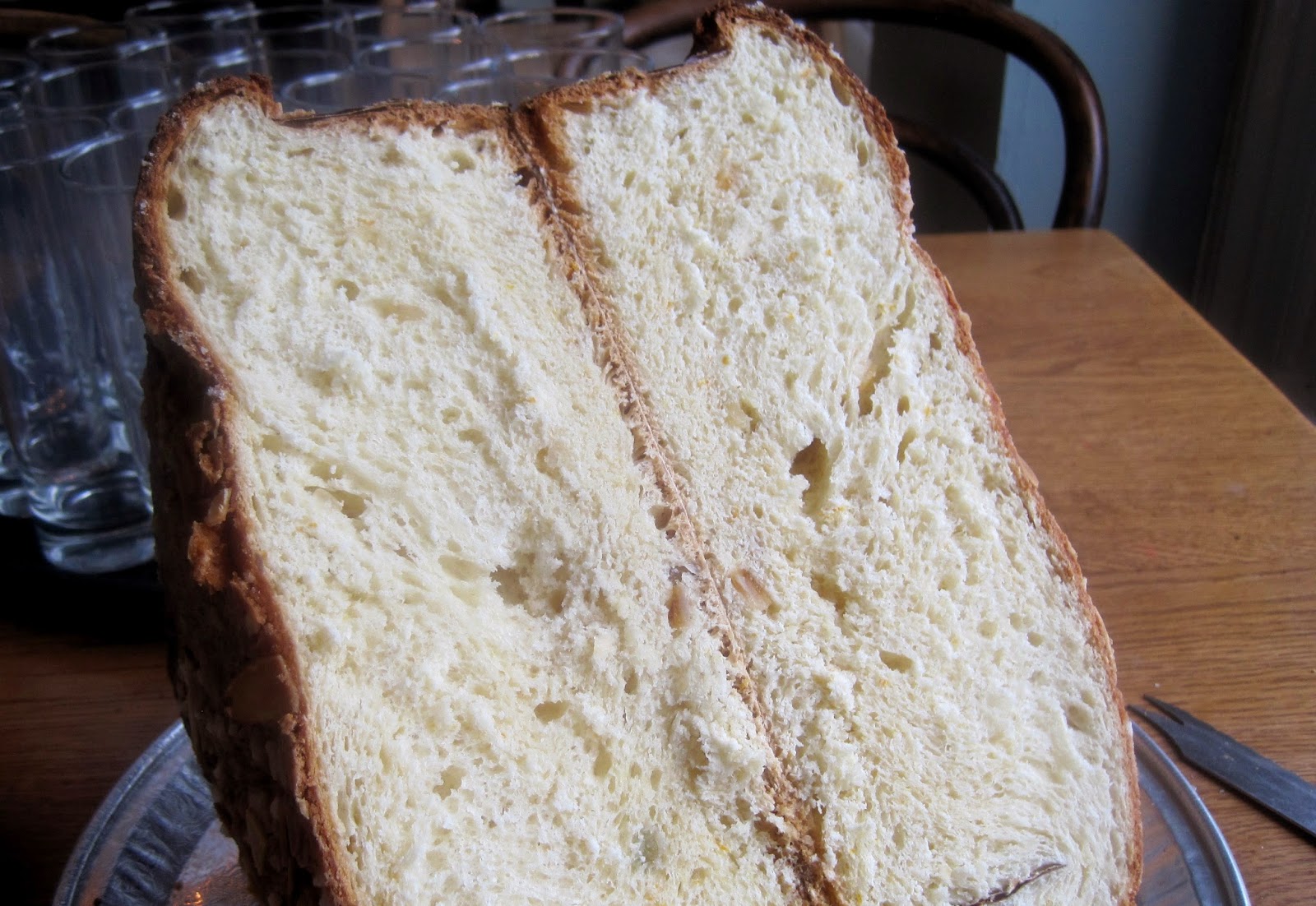 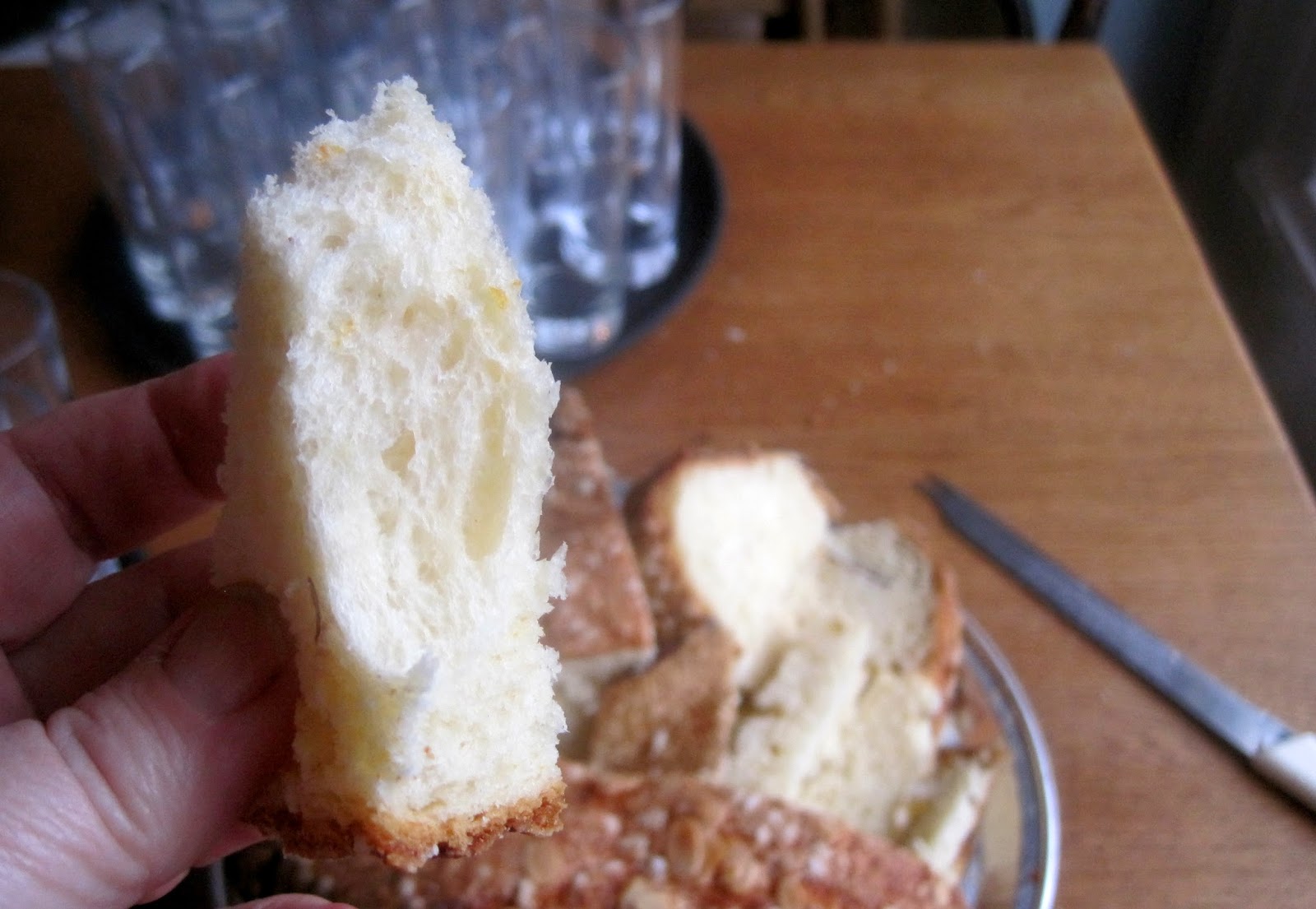 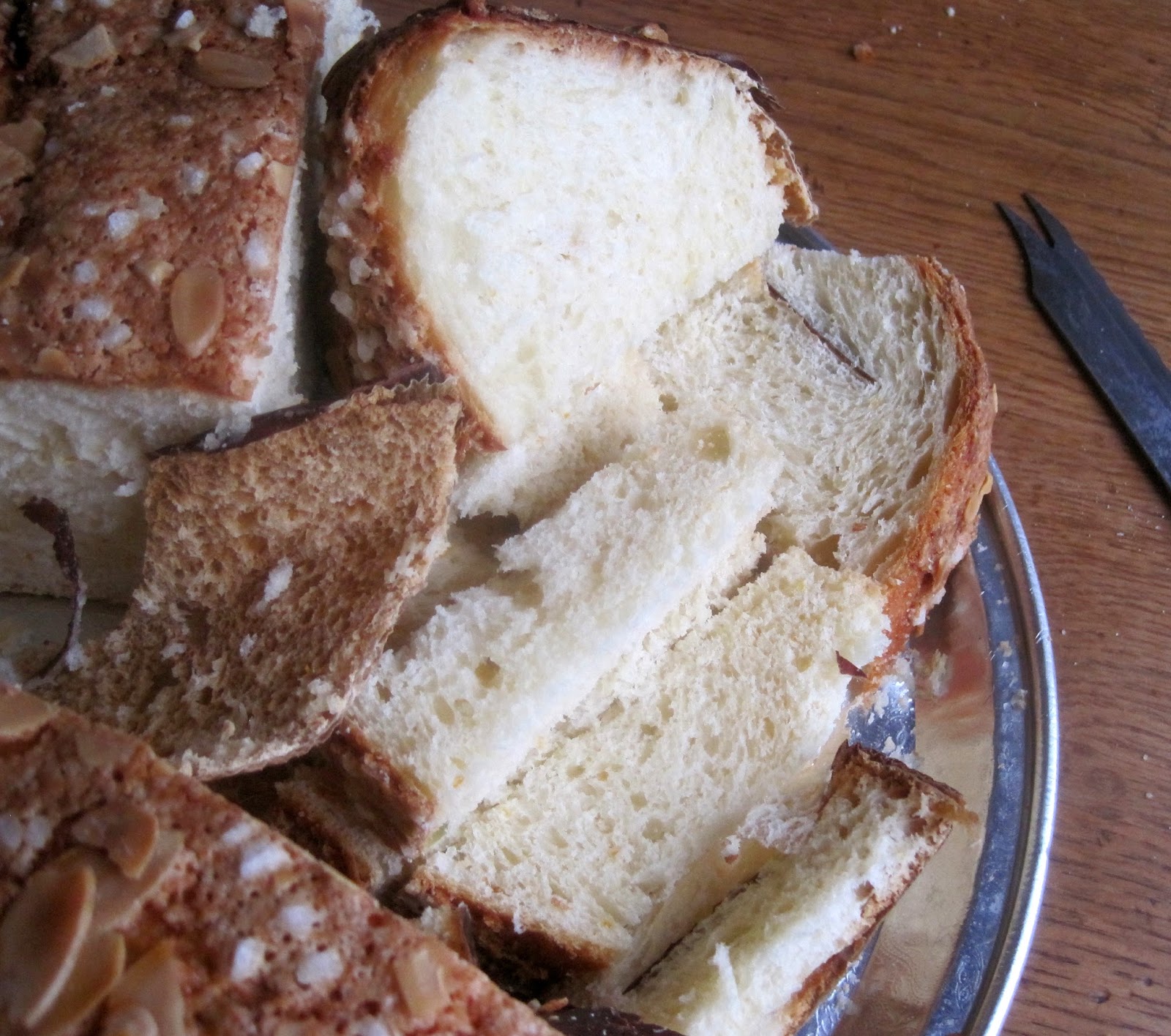 When I made it the 2nd time, I decided to halve the quantity and use half in a colomba case, and half in two medium panettone cases, this worked fine. 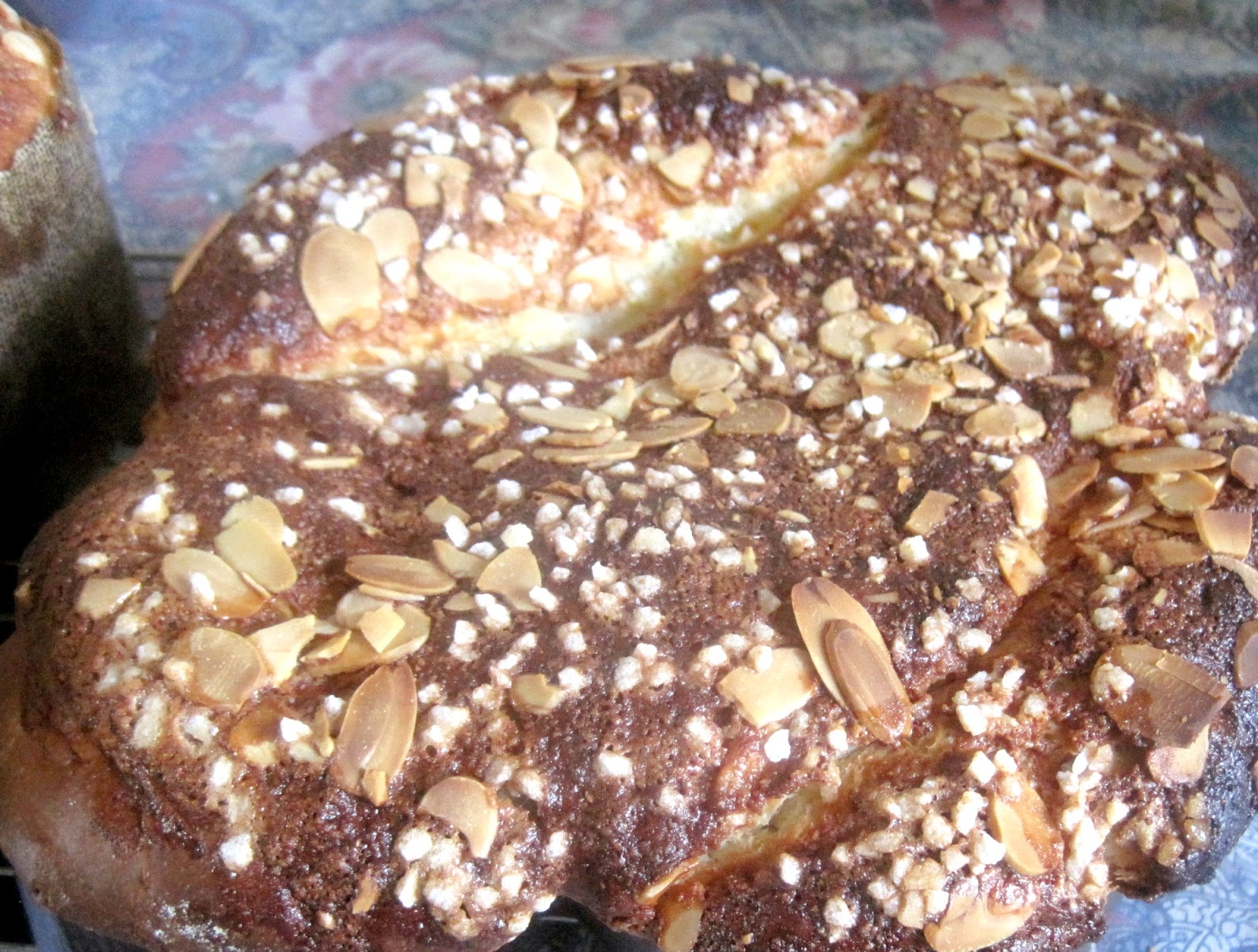 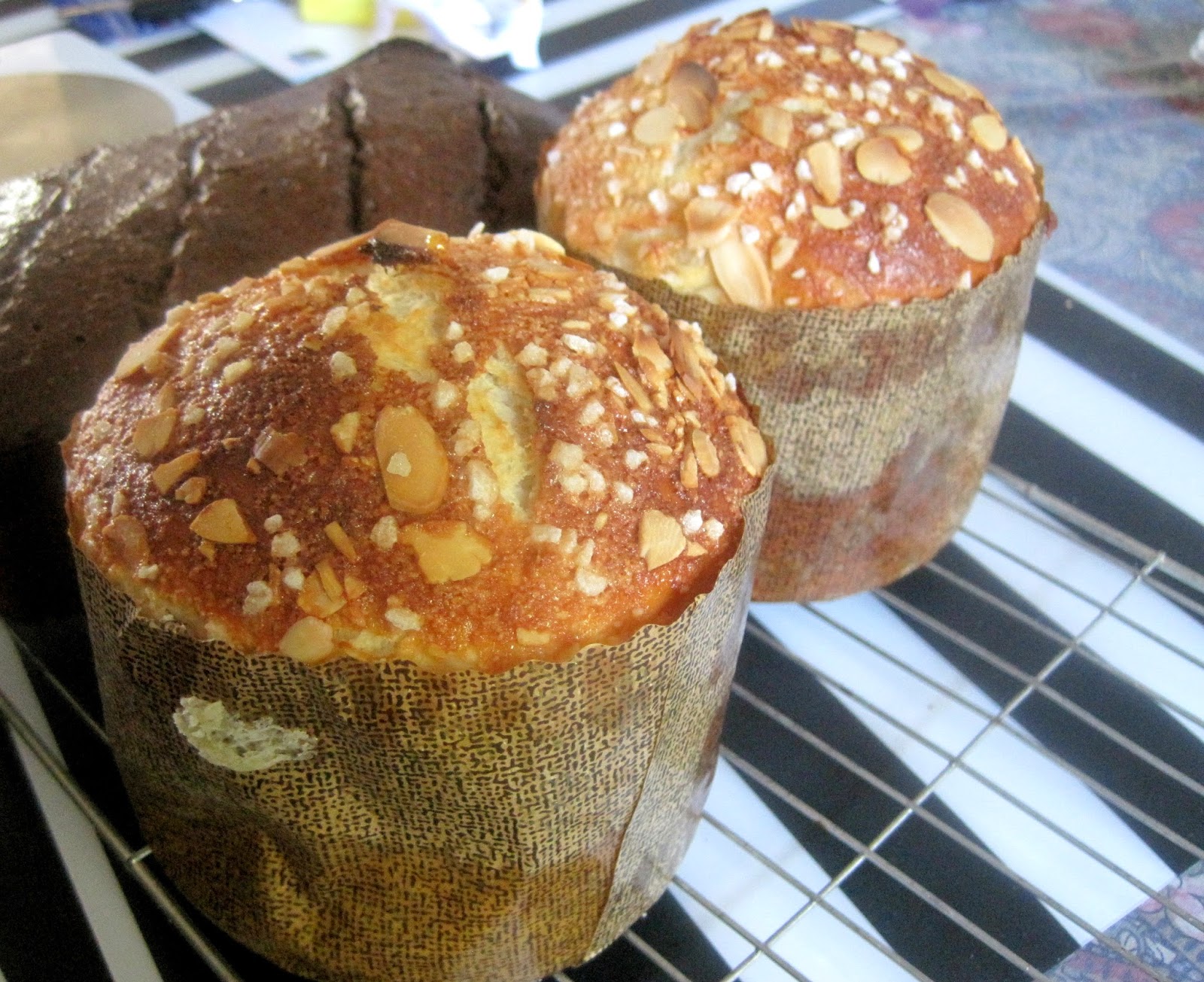 The bread mixture is made over two days, which adds a lot of flavour to the bread even without the extra flavourings I add in, the preferment helps the bread to stay moist and fresh, it is at its best in the first 2-3 days, but it will keep up to a week.

Day one:
The preferment.

Scald the milk, then allow it to cool to blood temperature (circa 35 C) - don't use it too hot or it will kill the yeast, better to have forgotten it and let it get too cool than use it too hot. When it is cool, mix with the flour and the yeast, cover with cling film and allow to ferment overnight or for around 8 hours minimum ( I have left it up to 24 hours and it is still good, though the flavour is more pronounced). It should puff up and then fall, so that it has lots of pock marks on the surface.

2 x Colomba cases, Or one and a couple of medium panetonne cases

Mix the milk , eggs and all the preferment together, and then add the essence and mix again. Add the flours, sugar, salt and yeast and mix to a loose dough (you can use the beater if you like, I just use the dough hook as it will be used next. Less washing up...) . Rest in the machine for around 10 minutes so that the flour is thoroughly saturated.

Mix on low to medium power with the dough hook for around 10 minutes until mixture starts to clear the bottom of the bowl. This is a very wet mixture so don't be surprised if it looks more like a batter at the beginning.  Persevere and you will see the gluten strands start to form and the entire dough will get more structured.  Add the butter a little at a time mixing until it is all absorbed, continue to mix for another 5 minutes until it is smooth, coming away from the base of the mixer and will stretch into a "windowpane" - stretch a bit of the dough away from the hook and it should form a thin sheet without breaking.  Add the zest and the finely chopped candied peel and mix for just a couple of minutes to incorporate them into the dough.

Cover the dough (I leave it in the food mixer bowl, taking the dough hook out) with cling film and leave for a couple of hours until it is at least tripled in size.

Turn the dough out very gently, and cut it in half, one half for each colomba or for one colomba and two smaller cakes.  For each colomba, cut about one third from one piece, and split this into two pieces, put these into the mould in the spaces for the wings. Gently stretch the other piece and drop into the central area, gently prodding it into the head and tail sections.  Cover and allow to recover until it is nearly to the top of the mould, roughly 45 mins.   If you are making just one colomba then cut the other half into two and drop into the panettone cases, forming a colomba with the first half of the dough.  (Turn the oven on now to Gas mark 7, 220 C 425 F ( it needs to be well pre-heated) and put a baking tray into the oven to heat up.

In the meantime, mix the egg whites, sugar and ground almonds together to make a very loose paste. When the dough is ready then LIGHTLY spread the mixture over each colomba using a spatula (keep it near the outside edges rather than the middle, it is heavier than the dough and may make it have a dent in the middle.)  Sprinkle with pearl sugar and flaked almonds.

Gently move the moulds (it will feel very very wobbly) onto the heated baking tray, and bake for around 35-40 minutes, turning the oven down to Mk 5 190 C 375 F after 25 minutes so it doesn't burn.  It needs to be well baked, or it will be doughy in the middle. If you have a probe thermometer (and I really do recommend one for baking enriched dough) the inside temperature of the cake should be at least 190 F when it is cooked.

Move to a cooling rack and let it completely cool before cutting.

This dough is wonderful, and can be used for all sorts of different cakes just by changing the flavourings. I'll be putting some other suggestions on shortly.

The Best of A Greedy Piglet : Sparrowgrass and Blender Hollandaise

I was reminded of this post from May 2012 today, with a Twitter request for easy fast hollandaise sauce.  If you have a stick blender this is far and away the best and easiest way to make it.  And (despite the fact I haven't had any yet) English asparagus is in full flood at the moment. So boil your sparrows and dip your grass....

I am not particularly precious about only eating English produce, although I will when I can. But I eat my fair share of Fairtrade bananas and extra fine green beans. However, there are some things that I prefer to only eat when they are in season in England. Strawberries, raspberries, rhubarb, gooseberries, purple sprouting broccoli and the King of the English Spring, green asparagus.

Not the thick white spears so beloved of the Italians and Spanish, but the tastier (in my opinion) green ones we get in this country from April (when the weather is fine, it was really late this year, we had such awful cold, wet weather) through to about the end of May. Asparagus comes in many different sizes, from the Extra Choice thick fat spears found in the very best emporia, to the fat bunches of medium thick down to sprue (the very skinny ones) you can find at farm shops in the country and farmers markets here in London.

I like asparagus cold as well. It works well chopped in a salad, in which case I cut the tips off, and slice the stems into inch long segments. Blanch the stems for about a minute, then add the tips for just a few seconds. Strain and straight into cold water. Then drained they can be added to all sorts of salads, rice, pasta, or just a green salad.

I had a real treat this year at La Hogue Farm Shop, during their excellent Garden & Lifestyle Show. I had bought myself some medium sized green asparagus , and came across Chris as I was leaving with my groaning carrier bags. He nipped outside, and came back brandishing a bunch of the most enormous purple spears I have ever seen. Not for the faint hearted these, or for teeny little mouths.

Look, you can see the difference between my green ones and these purple beauties. 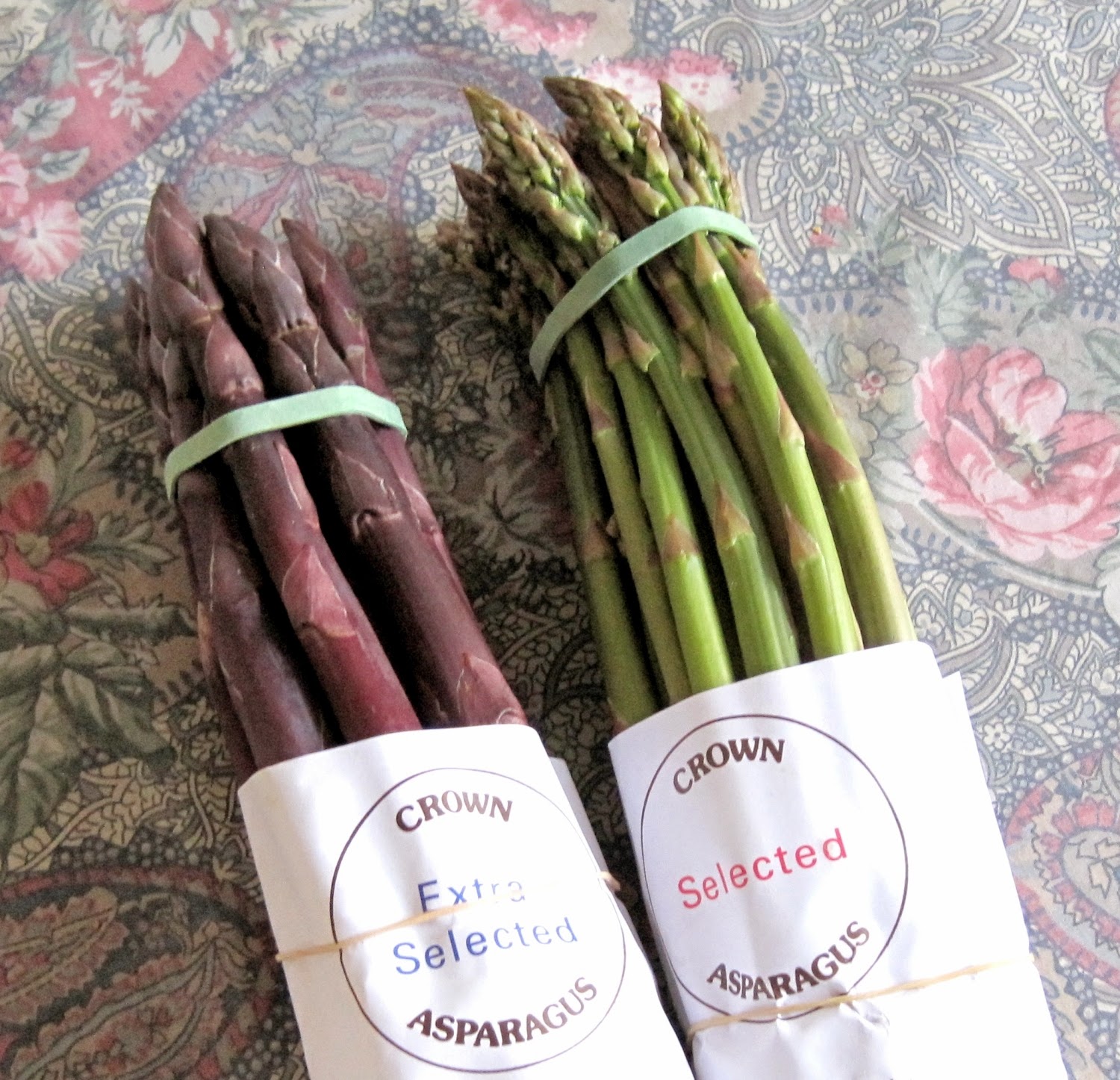 The tips were perfect, and HUGE! 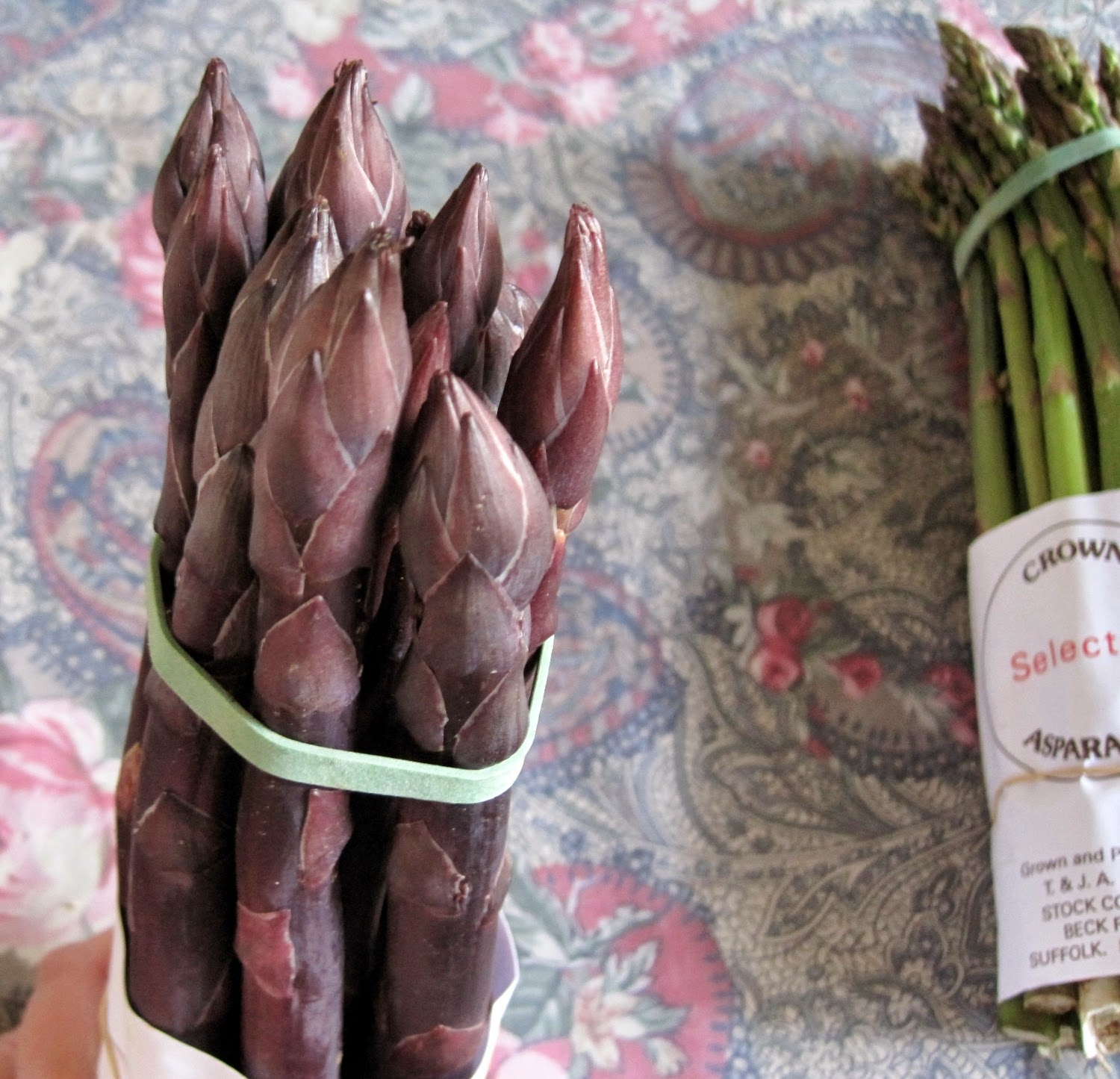 These definitely had to be kept as simple as possible. Into a pot of boiling water for barely 2 minutes, and drained to be eaten with a pot of lemon-ny hollandaise sauce. Which I had always thought was tricky.

Aha! Not now I have a stick blender (Christmas present from the Beloved, most happy choice. I was contemplating getting a Bamix, although he didn't know, but the John Lewis one I have is a good solid little workhorse. I recommend.)

I had seen Carl Legge talking about making mayonnaise with his stick blender, and thought hollandaise was probably similar. A quick request on Twitter, and I was assured it was easy peasy. And a quick wander onto the net showed me how to do it in detail.


I used one egg yolk, a pinch of salt, the juice of half a lemon rather than the vinegar, and half a pack (125g) of unsalted butter. I think it took about a minute start to finish, including heating the butter. Amazing! 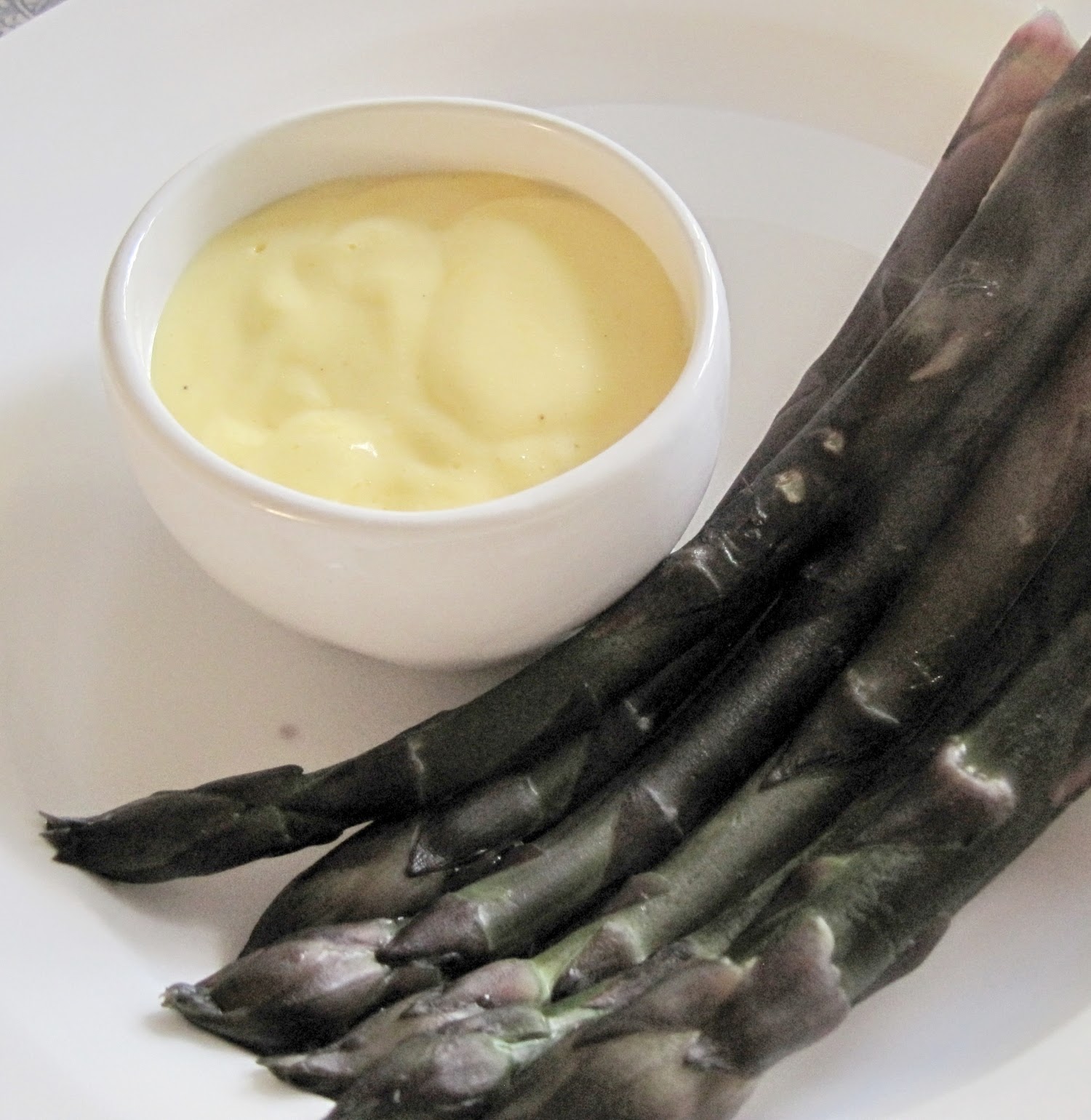 Plenty of sauce left over, I decided to try some of the green spears griddled instead of blanched. 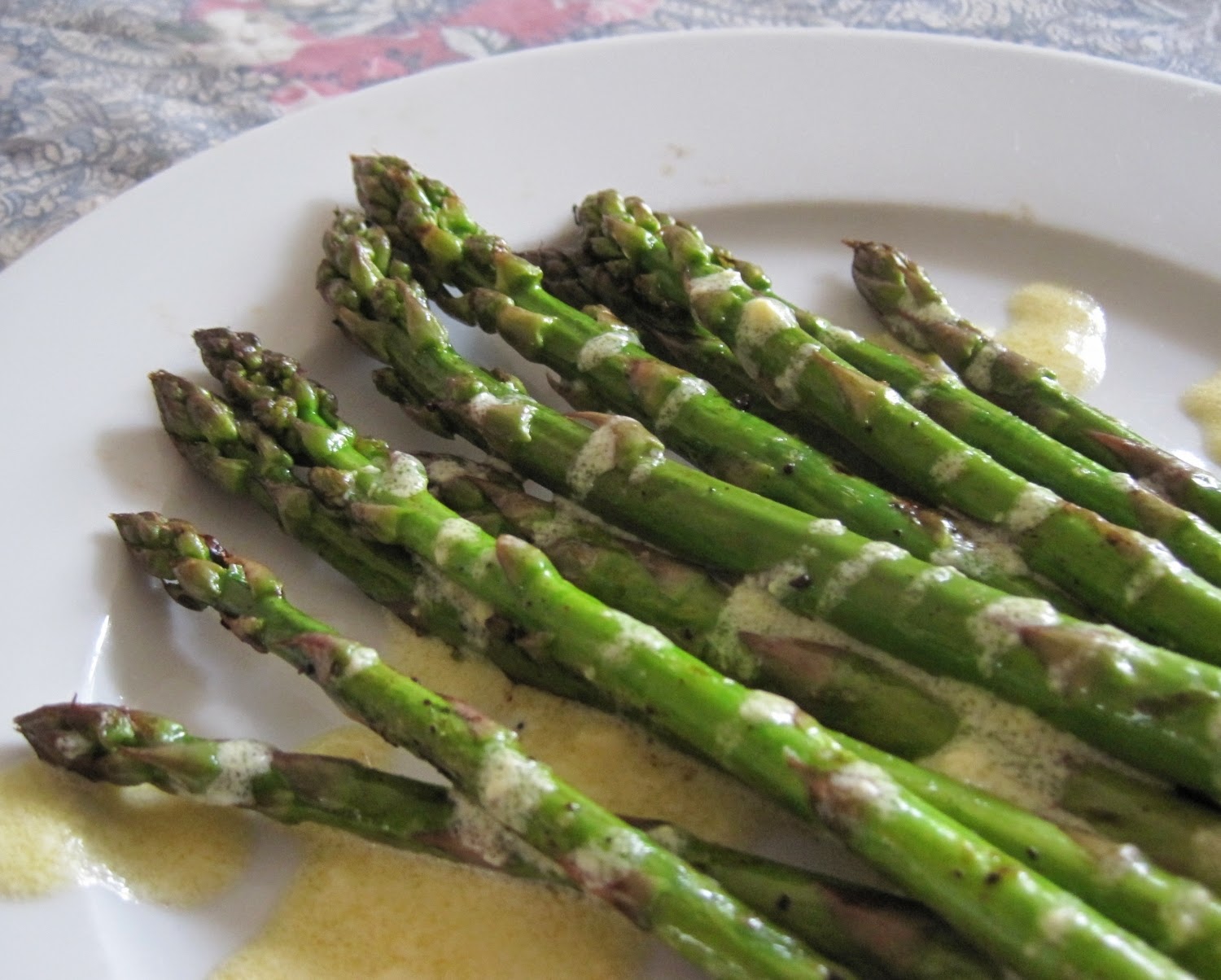 I know it is fashionable but to be honest, I found the oiliness distracting. It really is better in my view as simple as possible.

With lots of hollandaise of course...

Posted by josordoni at 10:35 No comments: