Macaroni Cheese.... not Mac AND Cheese. We are English, doncha know!

Mac and Cheese... it's everywhere. Being added into burgers, on the side of ribs, a side order at many of the current swathe of down and dirty, street food inspired, diner joints.  But...

.....what happened to English macaroni cheese? No "and" in there you will notice. Is it the same thing? Surely not?

To me, US Mac and Cheese has always meant a LOT of cheese. Luridly yellow tinged with orange from its processed cheese content, and rich as Croesus.   English macaroni cheese is more subtle, a gentler, creamier, altogether less strident dish.  So are the terms interchangeable? And why (whichever version you may prefer) are they suddenly so popular?

Well, the popularity is well earned.  Cooked the English way, it is simply delicious.  To my taste, the US version is less digestible, too rich. Both are stolid fare,  good solid working class chaps, with rolled up sleeves, made to fill stomachs at minimal expense.  Interestingly, when trying to see where it started out, it would seem that the early English version was closer to the US version. The earliest cook book to include a recipe seems to be the English "Forme of Cury" from the 14th century: "Take and make a thynne foyle of dowh. and kerve it on peces, and cast hem on boillyng water & seeþ it wele. take chese and grate it and butter cast bynethen and above as losyns. and serue forth." ("Make a thin foil of dough and cut it in pieces. Put them in boiling in water and seethe them well. Grate cheese and add it with butter beneath and above as with losyns [a dish similar to lasagne], and serve."

No mention of bechamel sauce and creaminess. This sounds like a solid wedge of cheesey pasta that would sit on your stomach for days.  In England, by the late 1700s Elizabeth Raffald was already moving towards a more easily digested sauce based dish, with cooked pasta added and then browned in the oven or under the grill.

The dish moved the US around the 1800s when Thomas Jefferson returned from Europe, and has been a US staple ever since. Normally termed a "casserole", (which I understand in the US to mean a mixture of ingredients cooked or finished in a casserole, often vegetables or pasta) the pasta is often added uncooked with cheese and cream or milk, and cooks to a creamy mass in the oven.  I found an article in the New York Times from 2006, which talks of a "vexatious infatuation with white sauce," in the early 20th century,  but insists that a true mac and cheese should be "nothing more than tender elbows of pasta suspended in pure molten cheddar, with a chewy, golden-brown crust of cheese on top."

Hmmmmmm. I guess it must be a question of personal taste. I shall certainly be quizzing my server as to what is in my side of Mac and Cheese.  If it is dressed in lightly cheesey bechamel, with a tang of mustard, I shall insist that the menu is amended immediately to Macaroni Cheese. I shall then order it.....

I can't give accurate measurements for this, it really depends on how hungry you are, it is just slightly undercooked macaroni, mixed into a thin cheese sauce, and then oven baked with a cheese topping until brown and bubbly. But there are a few things to consider:

Pasta is absorbent. I like thin elbow macaroni as it is less absorbent than the larger version, but still, make your sauce MUCH thinner than you think it should be. It will be sucked up as if by blotting paper, and you want your macaroni to be smoothly bathed in a savoury sauce, not sitting in dry, individual pieces.

Cheese can be sickly.  I use extra strong cheddar in judicious quantities with extra parmesan for the top, I want to only just taste the cheese in the sauce, to add a level of savoury that won't completely overpower the flavour of the pasta. I still want to taste the wheat.  Use a spoonful of English mustard in the sauce to bring out the flavour of the cheese, and remember to check the seasoning before adding any further salt as cheese can sometimes be very salty in a sauce.

Tomatoes on top. This is essential in my view. Sliced tomatoes on top, under the extra cheese. The sweetness of the tomatoes cuts the cloy of the sauce and just finishes it perfectly.

Consider this a full meal, not just a side dish that needs meat. Though some cold gammon is a sublime addition.

This is what mine looks like...which would you go for? English macaroni cheese? or US Mac & Cheese? 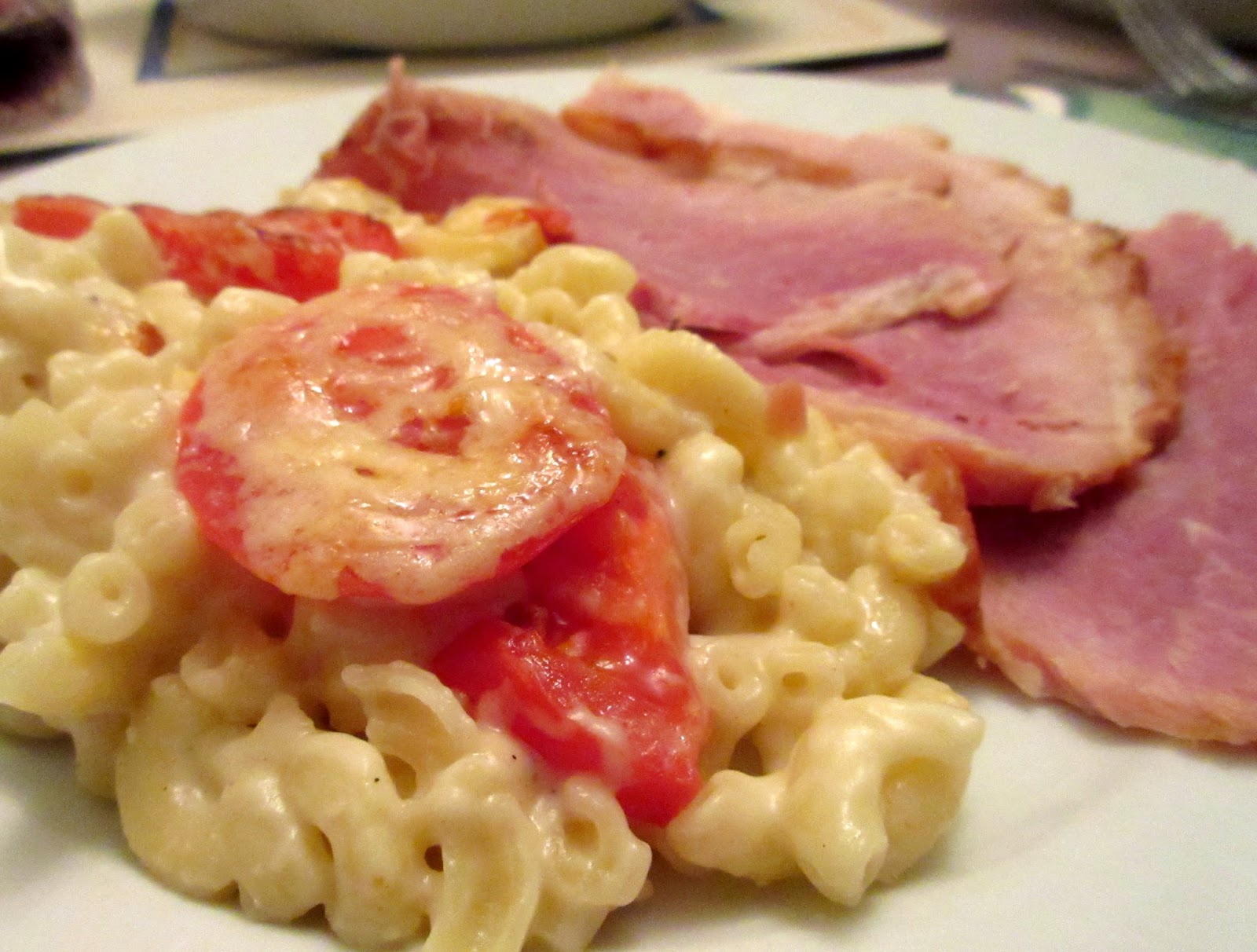 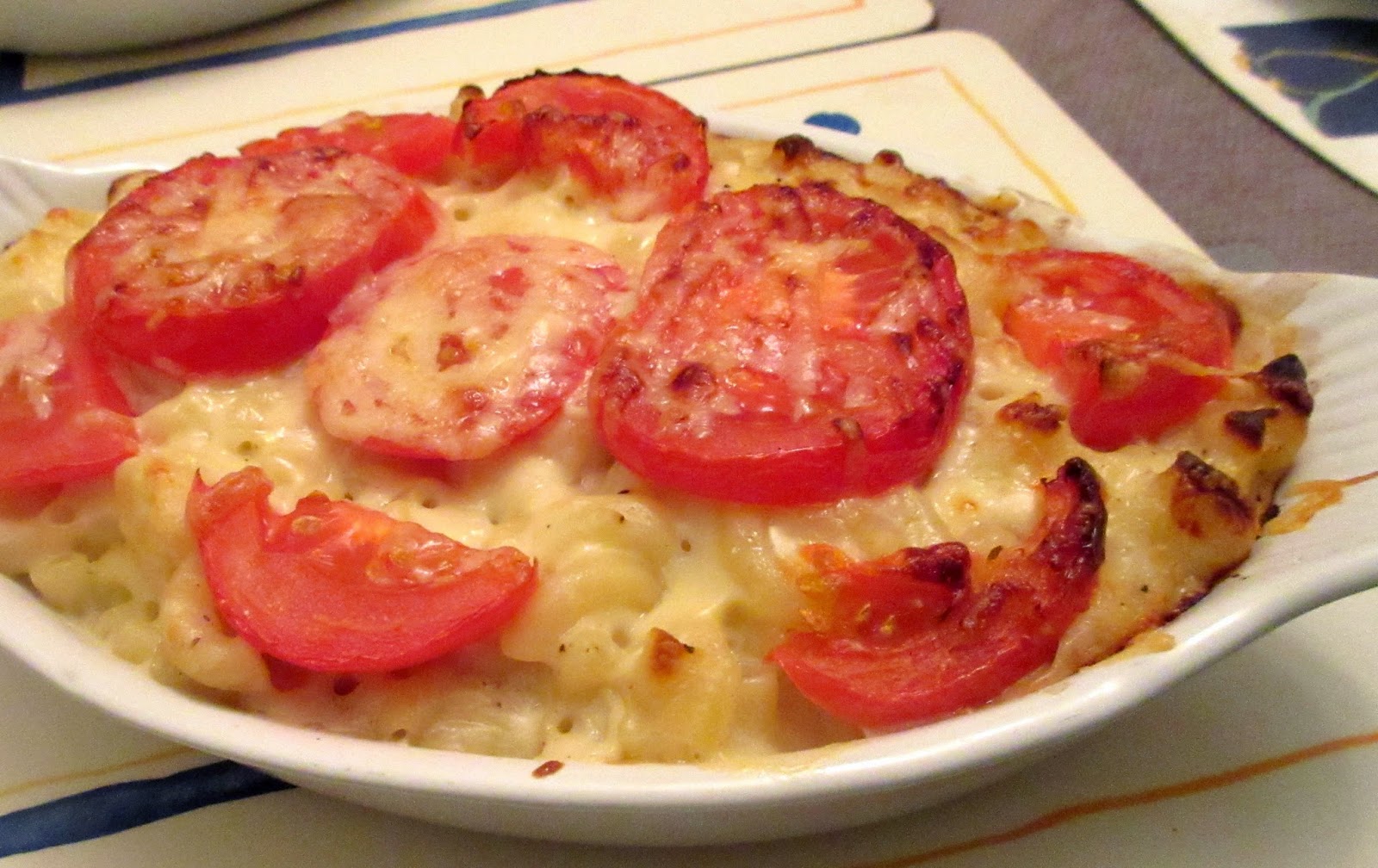