Or maybe I want to wrap something up. Something like a kebab. Or some meatballs. That is when (assuming I am not making fajitas and need flour tortillas...) I turn to pitta (or pitte or pita or pide, depending on which part of the Greek/Turkish/Middle East you come from). 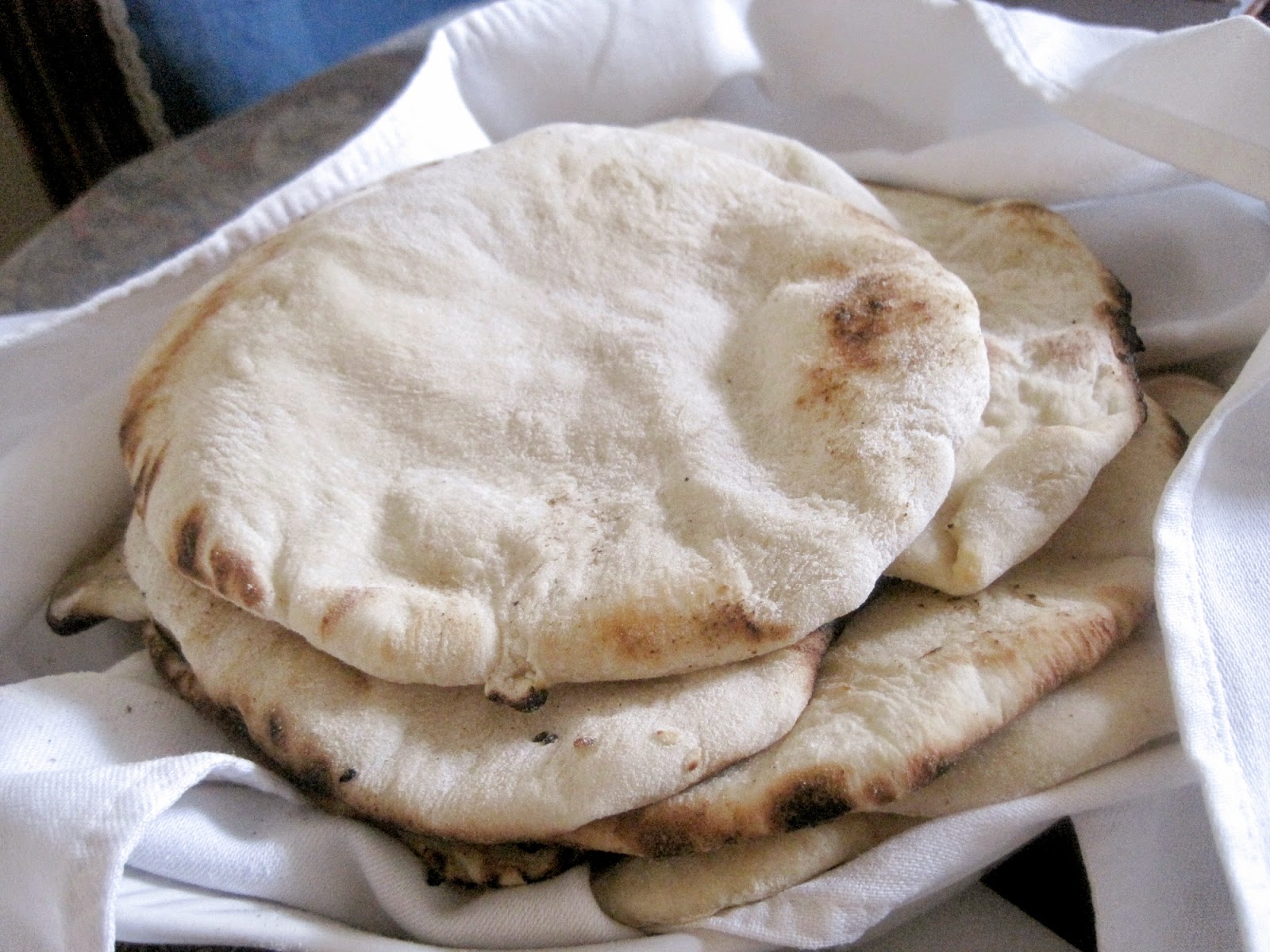 I reckon on needing roughly an hour and a half front to back for these. An hour for the rising, and half an hour for rolling and cooking them.  No fancy equipment needed, a fairly sturdy baking sheet (or a pizza stone is great if you have one, though I don't) a second baking sheet to act as a peel, and, if like me, you want a bit of char round the edges, you will need a gas hob or a barbecue.

This recipe will make around 8 tea plate sized pitta bread.

Flour for dusting the worksurface

Add a teaspoon and a half of instant yeast to one side of the bowl, and a scant flat teaspoon of salt to the other side. Using a spatula or a dough whisk if you have one, mix in 200g (yes grams not ml, I prefer to weigh my water) of warm water (about blood heat, put your finger in it should feel neither hot nor cold) and a tablespoon of olive oil, and mix to a rough dough.

Cover the bowl and leave for 10 mins. After 10 mins the flour will be nicely evenly hydrated, and you can give the dough a short 10-20 second knead. Just tip it onto an oiled worksurface, and with oiled hands fold it onto itself (as if you were folding up a towel to go in the airing cupboard :) until it starts to fight back. Pop it back in the bowl, give it another 10 mins, and then repeat the folding. Then cover it and leave in a warm place. for another 40 mins. Now is the time to turn the oven on, and put the baking sheet into the oven on a shelf near the top of the oven, allowing space above for the bread to puff up.  You want it as hot as you can get it so really crank it up.

After 40 mins, your dough should be nice and puffy.

Carefully tip out the dough and split it into 8 equal pieces. Roll each into a ball, and space them out on the worktop.  Cover with a slightly damp teatowel.

Working from the ones you rolled first, making two at a time, on a nicely floury worktop or board, roll them into ovals or rounds. Don't allow the dough to fold over on itself when you are rolling or you will get a dense bit that won't puff up.   Have a 2nd baking sheet, upside down, nicely floured, to one side. and as you roll out the balls, put them onto the upturned sheet. You want it upside down as you are going to use it like a bakers peel to transfer the pitte onto the very hot baking sheet in the oven.  (If you haven't done this before, it really is very easy, but you might fancy trying first as a cold run. Maybe with a couple of bits of sliced bread to do the flicking.. )

Open the oven door, pull the oven shelf out a bit, and quickly, with a sharp forward and back movement, put the pitte onto the hot baking sheet and close the oven.  Bake the pitte for around 3 minutes, they don't want to go brown they will be too hard. They SHOULD inflate like a little football, but often they don't and are none the worse for that.  If the oven hasn't got quite to full heat or your oven bakes cool then they may not puff.

Whilst the first two are cooking get the next two rolled and onto your upturned baking sheet. Make sure you flour it again so they don't stick when you flick them into the oven.

Remove the cooked pitte and put the next two in. Either wrap them straight away in a large cotton serviette or a teatowel to keep them soft, or pop them onto a hot bbq or an open gas flame for a few seconds each side to get a little char on them and then wrap them up.

Keep going until they are all cooked and wrapped up.

They will keep for the next day when you can pop them back in the oven briefly (wrapped in foil) to refresh them or you can freeze and defrost them in the oven for a couple of minutes.
Posted by josordoni at 09:50 2 comments: