The Best of A Greedy Piglet - The Queen's Jubilee Pannacotta

I have been invited to the London Produce Show and Conference in June, and will be so pleased to meet up with Westlands Wow! and chat about their amazing produce. Talking about them on Twitter yesterday with Carol Ford from Growing Direct reminded me of this rather lovely dessert I made in June of 2012.  English strawberries will be in the shops soon, so it is time to make this again I think.


I have been really delighted to have been sent a HUGE box of Heritage Tomatoes and Inspired micro vegetables and edible flowers from Westlands Wow, to see what a home cook can come up with in a domestic kitchen rather than a professional environment. 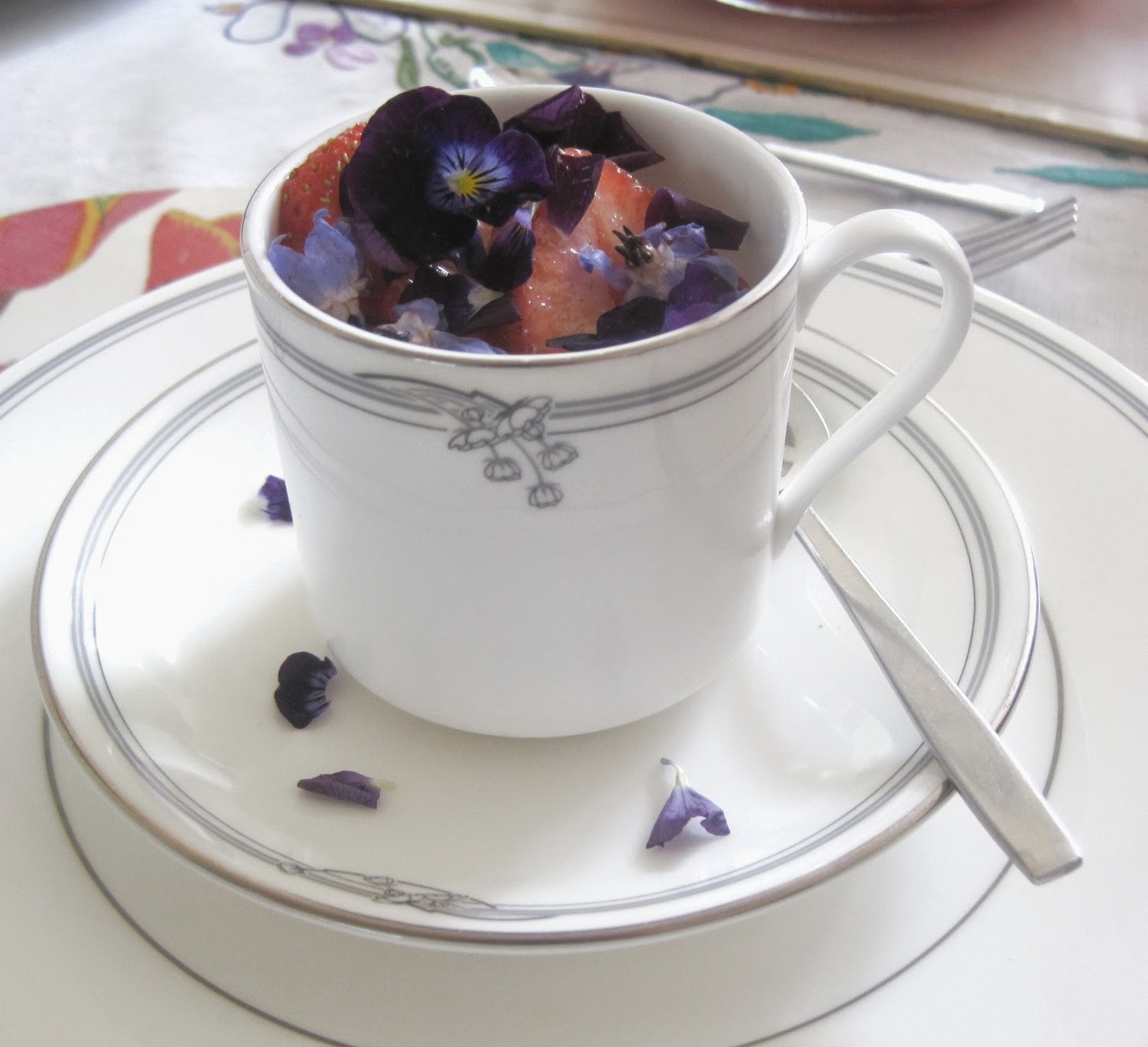 The micro leaves and flowerheads are really unusual, you might be able to grow some of these, and you will possibly be able to forage them if you know what you are looking for, but you are very unlikely to find more than one or two of these in even the best supermarkets.

These are the lovely micro leaves and flowers that you find incorporated into meals in the most modern of Michelin starred restaurants. They add colour, texture and lively bursts of flavour. But they are delicate in the extreme, and need a rapid turnover. My fridge picked this week to throw a tantrum, and I am sorry that I lost some of the more delicate - I managed to save the baby watercress, and most of the radish flowers, but the popcorn shoots didn't make the next day.

Fortunately, I had used some immediately, so was able to savour them at their best. The flower heads had seemed the most fragile (although in fact the borage and viola are quite robust and last well when the fridge is working..) so I decided to try them out first of all.

I started off with a special Jubilee dessert as I had family coming. I had some elderflowers syrup left over from last years making, and as the elderflowers are just coming to their peak in the lane at the back of the house, this needed using up before I make the new batch.

Elderflower Pannacotta with Strawberries and Borage and Viola Flowers.


Soak the gelatine in water until fully soft. In the meantime, scald the milk.

Drop the squeezed out gelatine into the hot milk, and stir until fully dissolved (will only take a moment or two).

Add the cream , the elderflower syrup and the orange essence if you have it.

Stir gently until mixed together, trying to avoid any froth. Taste and add a little more elderflower syrup if you feel it needs to be sweeter.

Strain into small cups or glasses, cover lightly with cling foil and put in the fridge for at least 3 hours until set.
Posted by josordoni at 10:31 No comments:

The best of A Greedy Piglet: The Dark Side.... Sourdough Scalded Rye Bread

This post was first published on A Greedy Piglet back in August of last year, the weather was very hot, and it made sourdough breads very difficult to control.  I now have a very lively new starter, so I think it is time to try this again. The recipe is interesting, but I think I might play around with it again. Watch this space...


I am very fond of rye bread. Both light rye, as you get in delis in NY and in French boulangeries, and also the darker Eastern European style of rye bread, deep in flavour with malt and caraway.

I discovered a rather excellent bakery in Westfield at Stratford, Karaway. They produce breads from Russia and it's surrounding countries, and one that I tried and liked very much was a Lithuanian Scalded Rye.

I saw that Paul Hollywood went to visit them during his recent Bread series, and it gave some tantalising glimpses into how they made it.Now, could I make something like that? I haven't made sourdough bread for some time, though I had intended to a while back and so had some rye leaven sitting in the fridge. Time to work it up and get experimenting.

Now one thing that you must know about me is that I am useless at following a recipe to a letter. I am actually much happier with the kind of old fashioned recipe that says "add enough flour to make a soft dough.." or "mix until done.." You have to experience the feel of the dough and work to that feeling, not rely on quantities. I am very content with variables.

So I kicked off by estimating rough quantities based on an overall formula of 350 grams of water to 500 grams of flour.

I fed my rye starter up over a couple of days to end up with 200g of 100% hydration wholegrain rye leaven. In the morning of the bake, I mixed this with 100g of cold water, and 100g of Sharpham Park's Bakers Blend (a very nice blend of wholewheat and white spelt, that I found in Waitrose. I like it very much so I do hope they don't run out of it....) and left this sponge sitting at room temperature for 4 hours to start fermenting.

I wanted to use a scald, as that is supposed to help the rye starches to gelatinise and so make a sweeter and lighter bread. So how about 100g of rye flour (I am using Dove Farm Rye, as this is the only easily obtainable Rye around here) and 100g boiling water? oh no! far too stiff, so another 50g of boiling water went in. Plus a tablespoon of caraway seeds - I wanted them in the soaker so they wouldn't be hard and nasty in my teeth. Much nicer porridge, so leave that for 4 hours alongside the sponge.

I shall need some malt. So 1 tsp each of dark and nutbrown malt powder from The Flour Bin (kindly sent to me as samples) mixed with a little boiling water and a tablespoon of honey. (Next time, maybe a little more malt to see how it affects the flavour. This amount I can't taste, but it might be helping with the overall flavour anyway). Mix it up and pop on one side.

After the four hours were up, I put the sponge and the scalded rye flour (broken into chunks) in the Kenwood, and mixed them together. I added the malt, 1 and a half teaspoons of salt, and a further 250g of White Bread Flour ( Marriage's Finest Strong White) . Mixed it (I can't say kneaded it, it was more like mixing polenta to be honest...) using the bread hook for 4 minutes, then left it for 2 hours, folded twice, left another 2 hours, shaped and popped it into the fridge to rise overnight.

In the morning it was risen but also it had spread out. I should have used a banneton but I only have a round one, and I wanted a more torpedo shaped loaf. So I folded it to tighten it up a bit, and popped it onto a baking sheet covered in cornmeal.

I left it to relax for half an hour, whilst I cranked the oven heat up as far as it would go, and then added a pan of boiling water and the bread. Baked for 25 mins at full heat, then lowered the heat to Gas mk 5 375/190 for another 20 mins until the base was thoroughly cooked through. Out onto a rack and then LEAVE THE ROOM until it is quite cold. Actually, it probably could have done with leaving to the next day, but I am impatient!


It isn't at all pretty. It suffered from not being proofed properly and so not being shaped properly. It could have done with a smoother tighter skin on it, and possibly with a glaze of starch of some kind. But cut, it has a lovely texture, lighter than you would think. And very delicious.

Do have a go. I am no expert, and this is such an experiment. Let me know how you get on, so we can compare notes...
Posted by josordoni at 09:50 No comments: