The best of A Greedy Piglet..#understandblackberries

It was all the way back in 2011 that I posted this originally, back on the original Greedy Piglet blog. This was the first time that I met the inimitable Carol Ford, and realised just how much I love fresh produce.

This, of course, was all about the blackberries, and was somewhat later in the year, but I have LOADS of raspberries in the garden, and I am hearing that everyone is groaning under the weight of raspberries, loganberries, tayberries, strawberries, redcurrants, blackcurrants..all the glory of English summer berries seems to be hitting us at once.

So here is how to make the most delectable fruit vinegar. You can substitute any soft fruit for the blackberries in this recipe. In fact, one of my favourites is the most frugal. I use a stoner to take the stones out of my cherries, which leaves a little cap of fruit on one end. I throw the stones into a bowl cover them in wine vinegar, and then just add more stones as I go, topping up the vinegar to make sure it keeps them covered, until there is sufficient vinegar and it is sufficiently fruity to strain and sweeten for keeping.

By the way, the vinegar keeps amazingly well. I still have a teeeny bit left from this 2011 batch, and it is still rich and delicious.

It is the end of home grown summer fruit now... so sad, but it has lasted longer than usual this year with the mild autumn weather we have been having. And among the last to leave the supermarkets were the blackberries.

I have always treated blackberries as wild foraged fruit, rather than fruit to buy in the supermarket, but lots of our foraged blackberry bushes finished very early, so I turned to cultivated varieties. To my surprise, this year's fruit has been exceptionally large and sweet. Why is this?

I discovered why when I was invited by Carol Ford of Growing Direct to the #UnderstandingBlackberries event held by Berry Buddies Hargreaves Plants to introduce the Reuben blackberry to a group of interested people. I was thrilled to be included, most of the people who were invited were connected with the trade, either in a growing or selling capacity, or as a member of the specialist press. I, of course, am none of the above, but still found the event fascinating. The deeply technical information from Prof John Clark of Arkansas University, and Jane Fairlie of Hargreaves Plants , was balanced by the fun of listening to the esteemed Peter Seabrook, who excited us all with stories of his work in schools, nurturing the next generation of gardeners. The new Reuben blackberries are being created to grow and crop in one season, which will be perfect for introducing berries to schools, who need the children to be able to plant and harvest their crops within the confines of a single school year.

The Reuben blackberry is important to the consumer as it is sweeter, has a longer growing period, and resists mould. Sweetness is good for a lot of people, although to be honest, I like my berries on the tart side, but the resistance to mould is a real seller for me. I have thrown so many raspberries and blackberries away just because I didn't eat them in the short 1-2 day window you get from buying them to opening the fridge and finding them wet and starting to mould.

The Reuben not only eats well as a dessert fruit, it cooks well too. The second half of #understandingblackberries kicked off with Vickie Humber from Humbers Homemade preserves showing just how simple it is to make good jam. Well, it is simple if you have the knack, and Vickie certainly has. ( Her Blackberry jam is truly delicious. In fact it may knock Raspberry of its perch as my favourite jam. Even in a Women's Institute Victoria sponge it would be better than raspberry! )

Chef Jose Souto produced some fabulous muntjac deer with blackberry sauce, and a truly scrumptious blackberry and meringue semifreddo that could also be served as a mousse. I could have eaten both again and again and again...

Rupert Parsons of Womersley Fruit Vinegars was with us too, offering tastings of his stunning award winning blackberry vinegar. I have been a huge fan of Rupert's family vinegars for a while now, they are brilliant as salad dressings and added to meat and fish to intensify the flavours. Vickie of Humbers Homemade also produces a range of vinegars. All of them are delicious - if you haven't tried fruit vinegars yet, I must urge you to try.

Of course, in the best way of true food lovers, I felt that I had to try my hand at making vinegar too. I might not get the same level of finesse as Rupert and Vickie (after all, they are professional and have been making fruit vinegar for a lot longer than I have..) but it would be interesting to see how the flavours would differ. And, not being one to do things in small ways, I decided to make a selection of three types of blackberry vinegar, all made using the same amount of fruit and vinegar, roughly according to Pam Corbin's recipe. I used wild brambles, Loch Ness (culinary) blackberries and Reuben (dessert) blackberries.

I say roughly, she uses 600ml of vinegar to 1kg of fruit. I made mine with 500g of fruit to 500 ml white wine vinegar, steeped for 10 days in a bowl covered in clingfilm, kept in the cool. After the 10 days, strain the vinegar through a jelly bag ( best left overnight in the same way as for jellies) and then add between 150-300g of sugar for every 500ml of strained vinegar (dependent on how sweet you like your vinegar). Let the sugar dissolve, then boil for around 8-12 minutes until syrupy. Don't boil for any longer though, or you will end up with it concentrating and setting too much, more like jelly than syrup. (Don't throw the strained blackberries out, add them to a pan of chopped crab or cooking apples to boil up to produce blackberry and apple juice for jelly, or add them into a favourite apple chutney recipe to add intense fruitiness. Remember the frugality mantra.. waste NOTHING..)

It is heavenly stuff. I love it with sparkling water as a refreshing drink, mixed with a little extra wine vinegar as a fat free salad dressing, spooned over meat as a glaze (in the way that Chef Jose glazed the venison) or mixed into gravies (in the same way that classically trained chefs use a gastrique) to add depth and zing to the flavour.

It was interesting that the different blackberries did certainly add different things to the vinegars. I love the intense sweetness of the wild blackberries, but interestingly, many people found that too sweet and sour, and preferred the gentler vinegars made from the cultivated berries.

An interesting and highly educational evening, thank you to everyone.

Now....are you hungry? So who's for blackberry and apple crumble then? 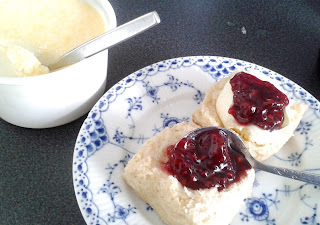 Jam on the top or on the bottom? Do you care? I guess that, being a Londoner, I am more interested in getting the little nugget of creamy jamminess into my mouth than arguing for a West Country standard. So I shall swap mine about, sometimes on top, sometimes underneath, that blanket of thick, mellow creamy richness. 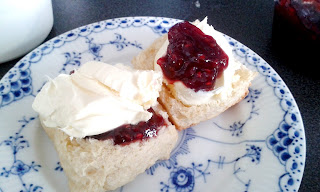 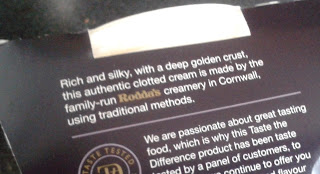 Jam I am not fussy about, so long as it rich and fruity. (although this one is home made raspberry jam and is delicious)

But I am fussy about my scone. Firstly, it is a SKONN. None of that odd SKONE business.

Brian Bilston on the Twitters said this today, his poem for #NationalCreamTeaDay:

Is it pronounced
scone
or scone?

I guess that's
what you'd call
a known un-known


So there you are it would be a non un-non in this house. If it were un-non of course. Although it is non to me to be a scone. Anyway... 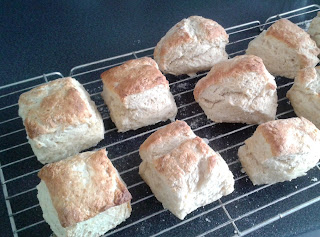 My recipe: based on Dan Lepard's Everyday Scones from Short and Sweet

200g everyday plain flour
200g 00 pasta flour (I like Sainsbury's TTD own brand one)
2 level tsp cream of tartar
half level tsp salt
20g caster sugar - or more or less according to how you sweet you like your scones. This makes a scone that has just a faint sweetness to complement the jam

Mix this together in a bowl.
Rub in
50g unsalted butter (or salted if that is what you have, in which case leave out the half tsp salt above)

Meanwhile in a jug, mix together
250 ml slightly sour whole milk, or milk blended with a few tablespoons of yoghurt
25ml double cream
1tsp bicarb of soda
(adding the bicarb of soda to the milk seems to make the scones lighter and doesn't leave any soda patches to taste soapy in your mouth)

Add the liquid to the dry mixture, and lightly blend together using a table knife, not a wooden spoon. You want to keep the mixture light and not compressed in any way.  When it is almost fully blended, tip it out onto the worktop, and lightly knead using just the tips of your fingers to incorporate all the flour.

Pat the mixture out to about an inch thick - I prefer not to roll, I think it compresses the mixture, but give it a go if you like. If you are making square scones, to minimise any waste, then square up the edges using a palette knife or similar, and then cut into 12 squares.

If you prefer, roll the mixture out keeping it nice and thick, and cut round scones. Very lightly knead the trimmings and cut more, but only do that once, any more and they will be really heavy.

Well flour a baking tray, and put the scones on to the floured surface, not touching but not far apart. They rise straighter if they are close together.  Brush the tops with milk (or egg if you like them golden but I prefer the softer gloss of milk)

Bake for 14 minutes until gently golden but sides are still pale.

Allow to cool slightly, then slather with jam and cream and eat :)

Posted by josordoni at 08:23 No comments:

I love a good trade show... all those amazing new things to try, loads of people to talk to, to exchange information, and generally geek about food to our hearts delight.

The London Produce Show has to be a favourite, being all about fresh produce, the nuts and bolts of the food we eat, the delicious and amazing cornucopia of fruit and vegetables we grow here, and source from around the world.

There were terrific chef demos as well as stalls from individual suppliers, not least 2 for the Media Masterclass, where we tasted dishes that were prepared in front of us. Jeremy Pang from The School of Wok, and the Nikkei Boys, Michael Paul and Jordan Sclare, from Chotto Matte did their stuff, and we demolished it all with glorious gusto. 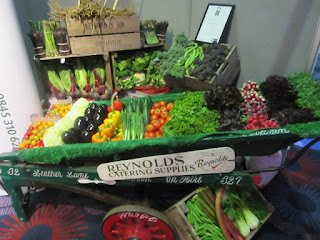 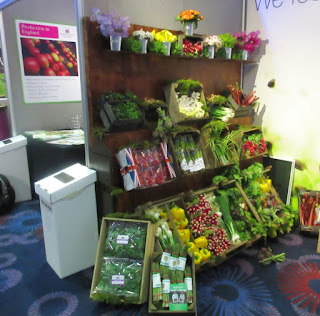 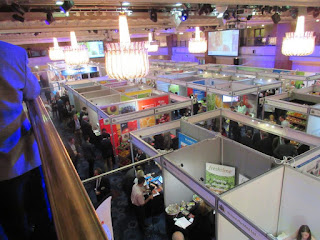 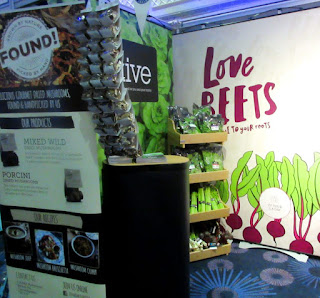 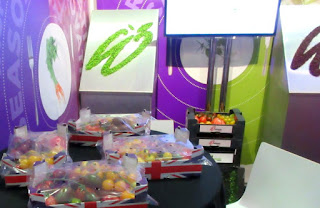 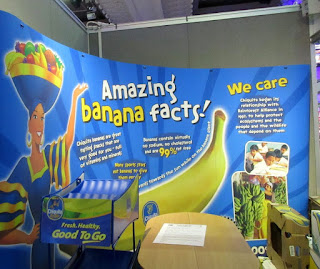 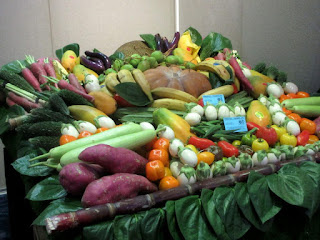 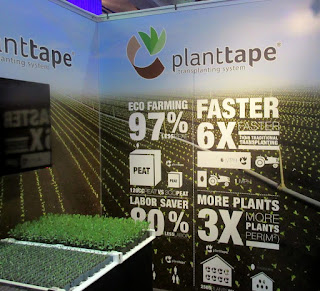 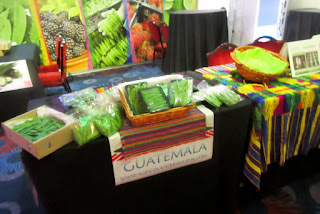 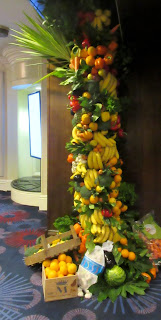 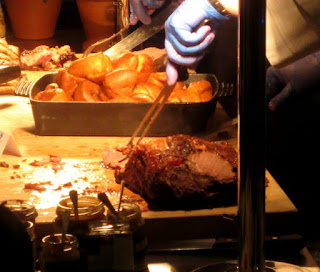 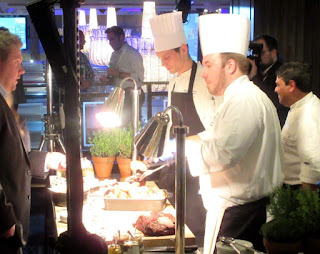 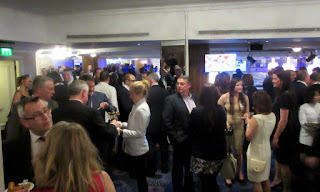 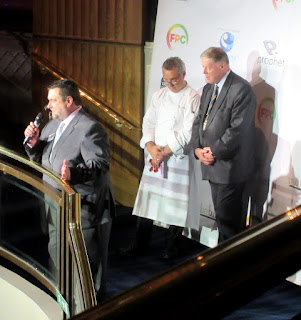 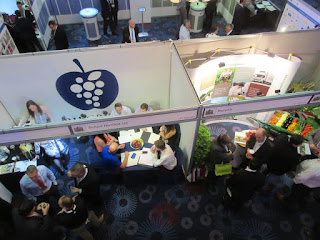 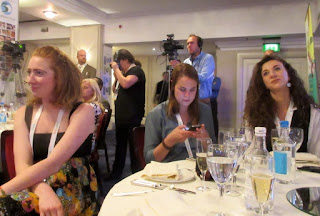 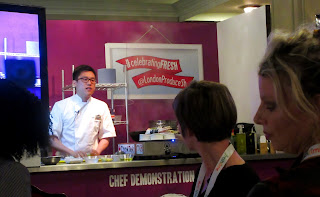 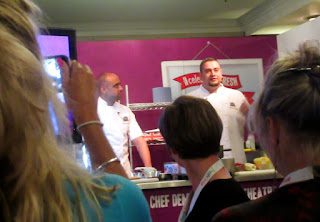 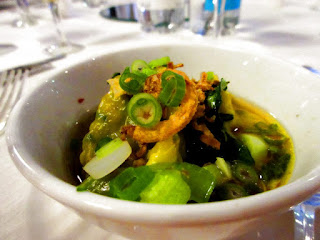 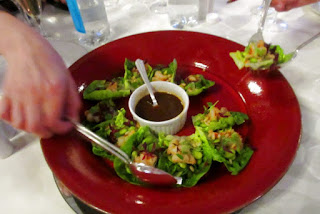 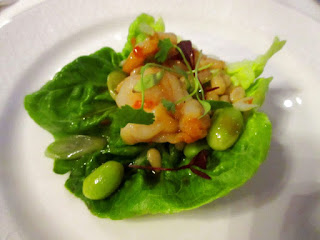