It is the 2nd April 2020, London is now more than two weeks into lock-down. I live in the suburbs, on the border of Chingford and Walthamstow, and outside, where it used to be seething with people and bicycles and cars,  it is eerily quiet and looks like the set of a dystopian film.

The streets are empty, the roads pretty much so, since none of us are supposed to leave our homes unless we have somewhere important to go to: food shops, doctors, pharmacy, work related if it is REALLY important. Otherwise, it's all down to social media and Whatsapp to keep in touch. Oh, and maybe Zoom if you are working from home.

Most shops are shut and shuttered, except for food stores, and with the exception of supermarkets, which have socially distanced 6 foot apart queues to get in (since nobody can get a delivery slot, even though that's what we're supposed to do), the food stores, the little ones I only use when I run out of bread or milk, and think to myself when I am in there, 'Who buys all these tins?', are proving to be free of people and a lifesaver.

I've pretty much got a couple of weeks worth of food now, except I'll need some fresh veg later in the week, and probably some milk. I found eggs last week for the first time in nearly a fortnight. I had  some flour delivered on Tuesday this week, and I'm waiting on a delivery of fresh veg and fruit (sadly, still not arrived though promised for Tuesday). Smaller restaurant supply companies who have extended their availability to home deliveries are overwhelmed, and we've been let down twice now for milk and veg.

In the meantime, I've got some rather stiff bread, and so it's time to bring out my mum's bread pudding recipe.

* no dried fruit? Use chopped up bananas or apples instead.
*no treacle? use gravy browning to add colour (no, really! it's just dark caramel)
*no butter? any fat will do - my mum used to use Atora suet (bit claggy, but if needs must...) 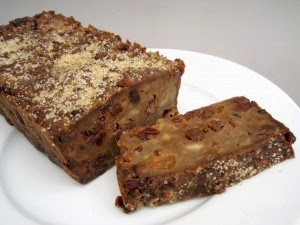