The best of A Greedy Piglet - Frugal Eating #1- Eco Marmalade

This post was first published in December 2010, and this is also a recipe I am asked for all the time.  It is useful to remember during the year when Seville oranges are out of season, but you have run out of marmalade.  Lemons and Limes can also be used - keep the shells in the freezer after using the juice.

I have been asked several times now when I am going to get my act together and give some instruction for my famed Eco Marmalade. Well, take your seats, ladies and gentlemen, for here you are..

Eco marmalade, you say. What is an eco? Is it like an orange? Can I buy it in Sainbury’s? Oh very funny...... Well yes you can. Because it’s eco if it ECOnomically uses the leftover rind of whatever citrus fruit you have segmented for your breakfast. Get it?

It came to me when preparing grapefruit and oranges for breakfast, segmenting the fruit and piling the peel into the compost colander for recycling. What a waste of a good thing. How could I use up this peel? I don’t like candied peel much (UPDATE 10/3/2014: err... actually, if it is home made, yes I do!) , so that wasn’t going to work. I pondered, and continued to make breakfast. Toast and marmalade… hold on.. what was that?

Marmalade. The lightbulb moment. I salvaged the rinds of the two red grapefruit and the two oranges from the bowl , together with the membranes from the centre and decided to experiment. 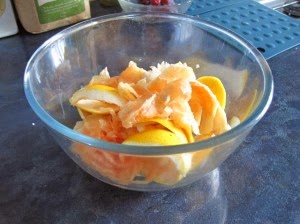 A carton of breakfast juice for the liquid part would add the fruit that was missing from the pulp that we had already eaten.

So working basically with the same method I use for my Seville Orange marmalade, I finely shredded the peel. As it had been sliced downwards in thick fingers, it was so easy to shred widthways, making fine shreds. I put this in a bowl added the membranes (and any odd pips, though red grapefruit don’t have many) tied in a piece of muslin, just covered it all with water, and left to soak overnight. 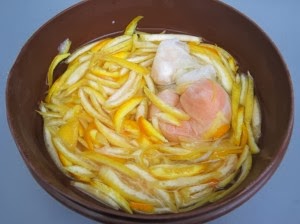 Day 2 I boiled it all gently until the peel was nice and soft – about 2 hours or so, you want the peel VERY soft. Recently, I have been using a pressure cooker, nice soft peel in about half an hour, so very eco for fuel saving too. Let it all cool down a bit, fish out the muslin bag and squeeze it firmly (to get what pectin you can, there isn’t a huge amount). Add a cup or two of orange juice (until you think it is sufficiently fruity) and then weigh the contents.

I had been really delighted to have been sent some sugar from Tate and Lyle to try out, to publicise their changeover to Fairtrade sugar in all their retail packs. One pack was Jam sugar - I always use preserving sugar but usually the one without pectin, this one had added pectin, so knowing that my pectin levels were a bit on the low side, it was useful and timely. It is amazing to look at, not really like you expect preserving sugar to look like at all, sort of golden and sandy looking.

I took the equivalent weight of the peel/water/juice and warmed it up in the oven (this helps it to dissolve more easily). Tipped it in and warmed the mix until the sugar melted completely. A rolling boil, a test for set, hot jars, done.

Nice elegant breakfast. And good for glazing gammon, and in marmalade cake. So far so good... 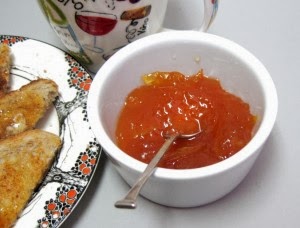 Aren’t I clever I thought… and then just recently, I found in my copy of Marguerite Patten’s "We'll Eat Again"

that using up rind like this was standard during the war.

Which just goes to show there is nothing new in this world. But doesn’t make the marmalade any less delicious. Eco. Brill.


Note: Thank you to Tate & Lyle for the jam sugar