(first published on A Greedy Piglet in November 2012)

With a bun. Not any old bun mind you, a very French bun. A Gibassier. 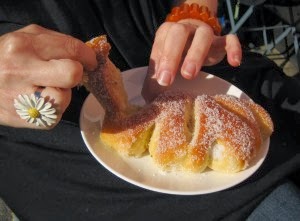 The Gibassier is an enriched brioche type bun, scented with orange flower water, with anise seeds and candied orange peel, that is a speciality of Provence. It is a variation of the Pompe a l'huile that is usually served as one of the Treize Desserts that are traditionally served at Christmas in France.

I ran into this special bun at The Pump Street Bakery in Orford, a very special bakery, very close to my heart, where Chris Brennan, the masterful master baker makes the most delicious bread and cakes. At the weekend, he makes these special breakfast buns, and I was so lucky that it was on a Saturday that I visited and found them.

I was only there for the weekend, but decided to make a detour on the way home to pick up some more buns to take home. Oh disaster! they were only made for Saturday, and they sold out really quickly. No buns for me to take home :(

This was terrible. I had only eaten one, and I was hooked already. There was only one thing for it. I had to learn how to make them.

There are a few recipes online, and I settled on one at The Fresh Loaf, (an excellent resource for all things baking by the way, if you haven't been there yet.. ) as it was well detailed and seemed to have good remarks as to how it came out.

I followed it to the letter. Exactly. (except that it was hand kneaded, not machine as in the recipe, as I don't have a stand mixer (yet)). It was good. But not perfect. 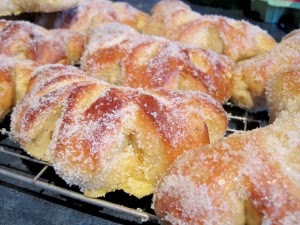 They look lovely, and quite close to what I want. The crumb was just a LITTLE bit on the tight side. I wanted them a teeny bit lighter. So I tweaked the recipe.

I added a little more milk and extra yeast to the preferment. Slightly more egg, slightly more water, a little extra olive oil (because the bottle slipped.. oops) I mixed bread flour and OO flour instead of using all bread flour. And I upped the yeast in the main mixture too.

So now we have:

Liquid part:
3 x whole large eggs
Olive oil 80 g
42g Orange Blossom Water (I used English Provender, the usual one you can find in the supermarket)
(I added in a half teaspoon of Valencian Orange extract)
35g warm water

Mix the liquids in a bowl and squish in the preferment. It won't fully dissolve but will be easier to combine with the rest of the dry ingredients.

Combine the dry ingredients in a bowl and then add the liquid ingredients above. Now comes the fun part. If you have a stand mixer, then you can follow the instructions in the original Fresh Loaf recipe. If not then you will have the sticky fun of kneading it. I followed the instructions here for kneading a la Richard Bertinet.


Some recipes tell you to add the butter in at the beginning. Which makes the kneading much easier, as the butter makes the dough silky. However, we are going for the traditional brioche route, also known as making life nice and hard for ourselves. We are going to add the butter after the initial kneading, so expect it to stay VERY sticky for quite a while in the initial stages. Have a good scraper near you, a bowl of hot soapy water in the sink for emergency, and ignore the phone or the man at the door.
Once the dough is starting to come together nicely, after about 10 minutes of slapping, add 70g of room temperature butter cut into lumps. The recipe says to add it piece at a time, but I decided that this was going to add faff to faff, so it got added all in one go, but dabbed onto the spread out dough, as if making rough puff pastry. Then roll up the dough and squish and slap until you have a satiny smooth cushion of dough. Pat the dough out flat, and sprinkle over the anise seeds and the orange peel, roll up and knead lightly.

Drop the dough into an oiled container and cover with oiled plastic, bulk ferment for 90 mins to 2 hours until fully doubled. Degas the dough by punching down in the bowl, remove from the bowl and scale into 60-70g portions - on my first tryout I scaled to 100g but this was too big, 60-70 is a good size I think, but you can make to any size you like.

Shape each piece into a ball and rest covered for half an hour. Shape each little ball into a tiny batard, or torpedo shape. Flatten down and cut the slits in the bread, three in the middle like a fan, then one between the points of the fan. Stretch them slightly as you put them on a parchment covered baking tray to proof. They should look roughly like this, although next time I might make them a little fatter and not as long: 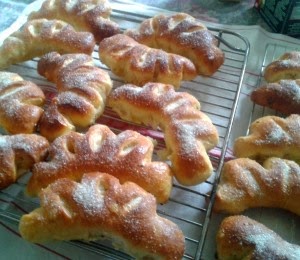 You will need to sort yourself out a little cutter about an inch (25mm) wide that you can punch down into the dough to cut, you don't want to use a knife as it will just drag the dough. I found a scraper that had an odd piece at the end. I've never worked out what it was for, but it is the ideal shape for cutting these slots. 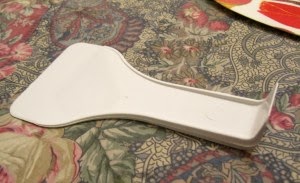 Cover with cling film again, and allow to proof for another hour to 90 mins until very puffy and light looking.
Glaze with beaten egg mixed with a little milk.
Preheat the oven to 400 F/200 C (350/180 for a fan oven) gas mark 6, and bake the buns for about 15 minutes until golden. Check the underside, you want that to be golden as well, if not, then turn them over and give another 5 minutes.

I got 19 buns out of my mixture, so they were on two trays. They were a little too close together so they merged a bit, but pulled apart fine after baking. I swapped the trays in the oven halfway through the baking to even the browning.

Take them out and put them on a cooling rack with a sheet of parchment underneath (that's under the rack, not under the buns).

Brush both sides of the bun in melted butter whilst still hot, and then toss in caster sugar to coat. Put back on the rack to fully cool. For these 2nd tries, I sprinkled the sugar on rather than tossing them, but I think the coating is more even when they are tossed although it uses more sugar

They freeze beautifully, so don't worry about having too many. I keep enough out of the freezer for a couple of days, and heat them for about 5 minutes before serving as I like them best slightly warm, it brings the orange flavours out 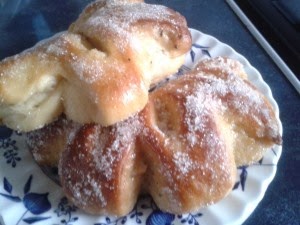 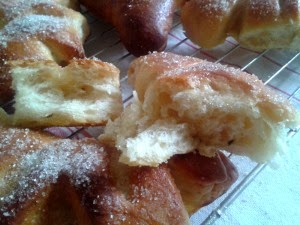 I hope you decide to give them a go, they are a lot of work, but really worth the effort.
Posted by josordoni at 04:20