I adore cheesecake. Proper cheesecake that is, the baked one, with a light brown crust that breaks to a silky creamy interior. As famously made at Lindy's in New York, and I am sure eaten by Oliver Hardy at some time or another. Well, he was certainly full fat enough.

So for a change of dessert at Christmastime, I made myself this luscious, creamy New York style cheesecake. 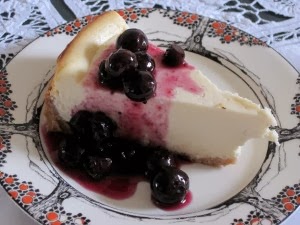 I pondered over various recipes, and decided to base this one around Ruth Watson's version from her latest book Something for the Weekend

- I am always happy with her recipes, and I picked up this latest book when we treated ourselves to a pre-Christmas stay at her hotel in Orford. It is a great read as ever, Ruth makes me laugh - if you ever watched her on any of episodes of The Hotel Inspector you will know she is blunt as blunt can be - her recipes are just as down to earth.

So here is the original: 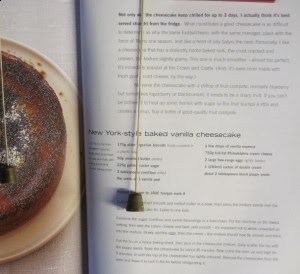 I did change it a bit.. I used half Philly and half curd cheese for a slightly less creamy finish. I baked the base for 15 mins before adding the cheesecake mix to make it crisper. And I cooked it at a lower temperature to avoid it inflating - I think the temperature used here sounds too high, I usually cook at gas Mark 3 for about the same time.

Like everyone I judge a cheesecake cooked when it wobbles in the middle without actually sloshing about (you remember... as Nigella put it, “so there is still a hint of inner thigh wobble”). Sometimes it takes longer sometimes less (depends on the gas pressure that day..). As a cheesecake won't deflate like a sponge cake, there is no problem with checking frequently until the wobble is not too squelchy. I have seen a lot of recipes that entail encasing the tin with foil, and cooking in a water bath to ensure that the cheese doesn't inflate and lose its smoothness, but to be honest, it does seem a lot of faff as this comes out perfectly nicely without. I am not trying to win a competition, I just want to eat a cheesecake.

But do please try and let me know if you think it makes a real difference.

Oh, and I added in some lemon juice as well as the vanilla. Because that true New York flavour doesn't come with just lemon, or just vanilla. It needs them both.

I didn't put the poppy seeds on this time (though I have tried them later and they are lovely) because I wanted to taste the blueberries in the light sauce. This was just fresh blueberries in some melted apple jelly. Light, fruity and delicious.

So this is my adjusted recipe:


175g Digestive Biscuits (or thereabouts, don't worry if you are a biscuit or so short)
50g melted unsalted butter

Crush the digestive biscuits (either in a bag with a rolling pin or in a food processor). Gently melt the butter and mix into the biscuit crumbs. Press into the base, and slightly up the sides of the tin. Put onto baking tray and bake for 10 mins at Gas mark 6 until golden and starting to crisp (DO NOT GO AND PLAY ON THE COMPUTER AND LOSE TRACK OF THE TIME, so that you come back to a pile of cinders and have to do it again.)

In the meantime, put everything together in a large bowl and using an electric whisk on low setting, combine until smooth and silky. You don't want to whisk it, you don't want any air into the mix, just to fully combine everything.

Tip onto the baked base, and bake in the centre of the oven for around 10 mins at Gas Mark 6, then turn the heat down to Mark 3 and bake for approximately an hour, checking frequently for the degree of wobble for the last 15 mins. Turn the oven off when wobble is to your liking and, with the door ajar, let the cheesecake cool in the oven. If you have a double oven, you can move it to the 2nd oven - that will be warm from the cooking so that the cake won't cool too quickly but not so warm that it will carry on cooking. The top may crack as it cools, but cooling it somewhere warm keeps this to a minimum.

Either serve at room temperature or chill, as you prefer, I like to serve with fresh fruit or fruit coulis.
Posted by josordoni at 07:22