The best of A Greedy Piglet - The Famous Stan Laurel Cheesecake

This was originally written for A Greedy Piglet on 5th March 2011.  This is a very popular recipe, as it fits very well into a Slimming World diet which I followed at the time. It was included in Total Greek Yoghurt's Kindle recipe book Every Day Eating .

Following up to the original post, since I developed this recipe, Total have released Fruyo real fruit yoghurts. I made a cheesecake using Cherry Fruyo, which was voted by the family as one of my best desserts. Substitute the 100g 0% Total in this recipe with a pot of Cherry Fruyo, reduce the sugar slightly to allow for the sweetening in the fruit yoghurt, and use almond essence instead of the vanilla. You can find frozen black cherries easily in the freezer department of most supermarkets, so I would use those for the fruit sauce.


So we've had the full fat cheesecake. Luscious and creamy and wonderful... and fattening. The Oliver Hardy of the cheesecake world.

Not at all the kind of thing that long thin Stan Laurel would have enjoyed. Oh no. But I bet he would have still relished a bit of skinny cheesecake now and then. And even though I am dieting, so do I. A cheesecake is not just for Christmas, is it?

So my next challenge was to take the Oliver Hardy cheesecake and make it Slimming World friendly.

So how does this look? 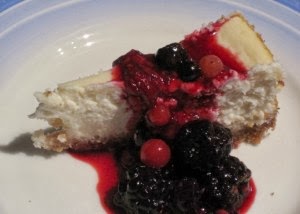 Well first off, it is going to be smaller than Oliver's one so that my slender wedge will still take the edge of my creamy cravings but won't cut too much of a swathe through my syn allowance. (If you don't know about Slimming World and the syn allowances, have a look here) I have a little 7 inch 18cm springform tin that will do fine.

Then the base: I have two options, use digestives but fewer of them, or make my own wholemeal shortbread mixture. Actually when I costed them out, they both come out roughly the same in syn value, so you can take your pick. If you have digestives use them, if not, and you don't want the rest of the packet in the house, I'd suggest making your own base. If you decide to use digestives, you will need to sub lower calorie spread of some kind for the butter - I use Yeo Valley Lighter butter, not massively low calorie, but it is based on organic butter rather than margarine, which I prefer for all sorts of reasons.

onwards to the filling, the fattening bit..

So what is most fattening here? The cream cheese and the cream. I know that the cream cheese can be subbed with any soft cheese, but whilst quark is completely free for me to eat, it makes quite a flaky textured cheese cake - I fancy something a little smoother. So how about half fat Philly and Quark mixed? and then I usually sub 0% Total Greek Yoghurt whenever cream is called for, so that could work.

Sugar? Well I have some Light Sugar from Tate & Lyle so that will cut the syn value too.

It needs some nice fruit sauce to top it, I don't want to use cooked fruit, and I don't want to use apple jelly either (sugar syns) but if you sprinkle granulated sweetener (something like Candarel or Splenda for example) onto frozen fruit, it makes its own syrup as it thaws. I used a mix of summer berries for a deeply fruity flavour. Job done.

So here we are:

Follow the instructions for Oliver Hardy's Cheesecake (I've copied them here for you).( If you are making the homemade wholemeal base, just blitz the ingredients for the base in a food processor until they cling together, and press into the base of the lined springform tin, and bake as for the biscuit base. )

Crush the digestive biscuits (either in a bag with a rolling pin or in a food processor). Gently melt the butter and mix into the biscuit crumbs. Press into the base, and slightly up the sides of the tin. Put onto baking tray and bake for 10 mins at Gas mark 6 until golden and starting to crisp (DO NOT GO AND PLAY ON THE COMPUTER AND LOSE TRACK OF THE TIME, so that you come back to a pile of cinders and have to do it again.)

In the meantime, put everything for the filling together in a large bowl and using an electric whisk on low setting, combine until smooth and silky. You don’t want to whisk it, you don’t want any air into the mix, just to fully combine everything.

Tip onto the baked base, and bake in the centre of the oven for around 10 mins at Gas Mark 6, then turn the heat down to Mark 3 and bake for approximately 45 mins in total, checking frequently for the degree of wobble for the last 15 mins. Turn the oven off when wobble is to your liking and, with the door ajar, let the cheesecake cool in the oven. If you have a double oven, you can move it to the 2nd oven – that will be warm from the cooking so that the cake won’t cool too quickly but not so warm that it will carry on cooking. The top may crack as it cools, but cooling it somewhere warm keeps this to a minimum.

Either serve at room temperature or chill, as you prefer, I like to serve with fresh fruit or fruit coulis. Cut the cheesecake into 16 slim slices, which come in at a rather saintly 2 syns per slice if served with fresh or frozen fruit.