The best of A Greedy Piglet - The Mini Gibassiers

Mini Gibassiers are just as delicious as big ones!

Do you remember the Gibassiers I made last year after Aldeburgh Food Festival, when I had them at Pump Street Bakery? I only make these in the wintry months, they don't feel right in the summer, with all the berries around there are lots of other things to make, but once the nights draw in and the light fades, they come back into their own. 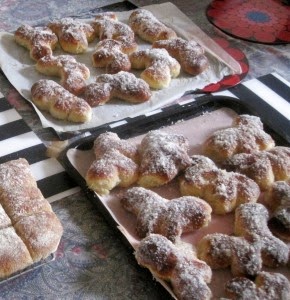 I made trayfuls of these minis for Thane Prince's Cook Book Club (held every month at the Draper's Arms in Islington.. do come one day and say hello!) where I have been elected to be in charge of the bread etc. for the monthly meetings. This month, we were so lucky, we had Paul A Young come to talk chocolate with us, and the wonderfully knowledgable and kind Fiona Beckett brought all kinds of different dessert wines to match the chocolate.

I didn't want to bake something with chocolate in it, as I thought here would be plenty of that from other members of the group, so I decided on these little gibassiers which I thought would complement any chocolate that was around. I changed the flavourings from anise and citrus peel to orange zest alone. And left out most of the orange flower water , replacing that and the water with fresh orange juice. Really really delicious little bite sized morsels they came out. 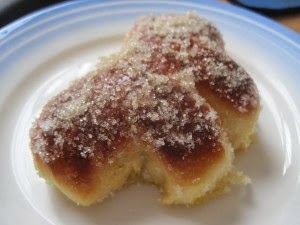 Interesting point about the flour this time as well. I had popped into our local Romanian delicatessen earlier in the year, searching for the bottles of sour cherries that I know are popular in all the Eastern European countries, and in chatting to the charming Romanian owner, got to talk about flour for sweet yeast doughs. She recommended a 000 flour that was made in Romania, and is very very finely milled, and that she said was perfect for panettone. I didn't get to make any panettone, but I do now keep the flour in just for brioches and buns like these. It has some additives that obviously affect the way the yeast reacts, but it makes a fabulous light delicate crumb. If you ever see it (I got my last lot in my local Turkish supermarket of all places) get it and try it and let me know what you think. 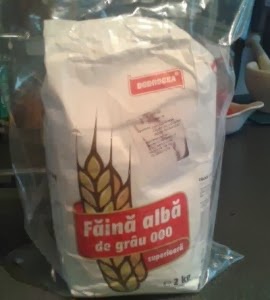 The recipe is slightly changed from before so I have copied it here and adjusted it for you - don't forget it is a 2 day affair if you decide to give it a go:

Liquid part:
3 x whole large eggs
Olive oil 80 g
80g Fresh squeezed orange juice (roughly the juice of one large orange, zest the orange first to use later)
1 tbs orange flower water (or just leave it out if you don't have it)

Dry part:
400g oo or 000 flour (I used the Romanian flour above but if you can't get it then any 00 flour or failing that, any plain flour)
100g caster sugar
7g (one tsp) fine salt
15g instant yeast or 30g fresh yeast - I have started to use fresh yeast these days in preference to instant, I think the crumb is softer. If you have a Sainsbury's with a bakery section, ask them you should find they will sell you fresh yeast very cheaply, I pay 20 for 50g at my local Sainsbury's.

Additions:
70g unsalted butter
finely zested rind of two oranges
120g melted butter
Caster sugar for finishing
Mix the liquids in a bowl and squish in the preferment. It won’t fully dissolve but will be easier to combine with the rest of the dry ingredients.

Combine the dry ingredients in a bowl and then add the liquid ingredients above. Now comes the fun part. If you have a stand mixer, then you can follow the instructions in the original Fresh Loaf recipe. If not then you will have the sticky fun of kneading it.  I suggest you follow the Richard Bertinet method as per his video here


(This one is for doughnuts, but the technique is the same..)

You'll notice that Richard Bertinet adds the butter in at the beginning. Which makes the kneading much easier, as the butter makes the dough silky. However, we are going for the traditional brioche route, also known as making life nice and hard for ourselves. We are going to add the butter after the initial kneading, so expect it to stay VERY sticky for quite a while in the initial stages. Have a good scraper near you, a bowl of hot soapy water in the sink for emergency, and ignore the phone or the man at the door.

Once the dough is starting to come together nicely, after about 10 minutes of slapping, add 70g of room temperature butter cut into lumps. The recipe says to add it piece at a time, but I decided that this was going to add faff to faff, so it got added all in one go, but dabbed onto the spread out dough, as if making rough puff pastry, along with the orange zest. Then roll up the dough and squish and slap until you have a satiny smooth cushion of dough.

If you are using a stand mixer, I mixed for 4 minutes on medium speed using the bread hook, and then added the butter in four lots, letting the mixer incorporate each one before adding in the next and adding the zest in with the last lot. Then I mixed for a further 4 minutes on medium until the dough was very supple and shiny. Drop the dough into an oiled container and cover tightly, bulk ferment for 90 mins to 2 hours until fully doubled. Degas the dough by gently folding it in the bowl, remove from the bowl and scale into 35g portions.

Shape each piece into a ball and rest covered for half an hour. Shape each little ball into a tiny batard, or torpedo shape. Flatten down and cut three slits in the sides of each piece Stretch them slightly as you put them on a parchment covered baking tray to proof. They should look roughly like this but without the slits in the middle - there isn't room for the inner slits on the mini size. These in the picture are the bigger 60-70 g pieces that make full sized gibs, I love the tiny ones even better but make whichever size suits you. 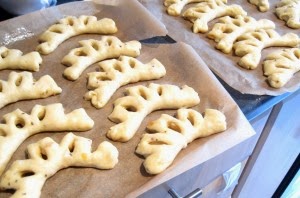 Cover with cling film again, and allow to proof for another hour to 90 mins until very puffy and light looking. Glaze with beaten egg mixed with a little milk.

Preheat the oven to 400 F/200 C (350/180 for a fan oven) gas mark 6, and bake the buns for about 10 minutes until golden. Check the underside, you want that to be golden as well, but be aware if you cooking on a silicone tray liner that the bases are not likely to brown underneath, in which case turn them over for a couple of minutes.

I got 30 mini buns out of my mixture, so they were on three trays. The cooking is short enough that just cook the first two trays, swap them about half way to even the browning, and then cook the third tray.

Take them out and put them on a cooling rack with a sheet of parchment underneath the tray. Brush both sides of the bun in melted butter whilst still hot, and then toss in caster sugar to coat. Put back on the rack to fully cool. They freeze beautifully, so don’t worry about having too many.

I keep enough out of the freezer for a couple of days, and heat them for about 5 minutes before serving as I like them best slightly warm, it brings the orange flavours out.

I do hope you give these a go if you haven't yet, they aren't difficult although there are a lot of stages to making them. But they are so good, they are really worth it!